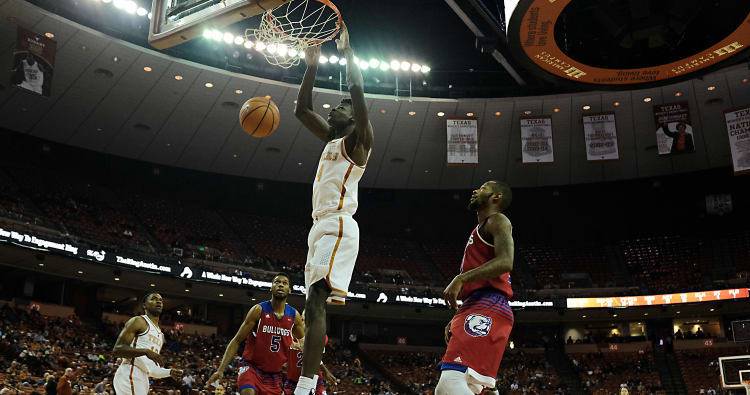 The Longhorns experimented with a towering lineup over the weekend that’s worthy of more exploration Monday against Tennessee State.

It’s a lineup with a lot of athleticism and length, but it also could leave the Longhorns (7-3) vulnerable defensively. Sophomore James Banks is the only other experienced big man who can sub in. The guards would have to pick up any excess slack.

“I like it, but it’s up to them,” Smart said. “Those guys, that’s three of our more talented players, for sure.”

Maybe it’s something the Horns use in special situations, much like their full-court diamond press. Or perhaps Smart can go to this lineup when Texas simply needs a spark.

“It’s not so much about playing one-on-one on the floor; it’s about having to guard screening action, pick-and-rolls, being in the right spot,” Smart said. “Dylan, mentally, he can do it all. He knows what to do. It’s just a matter of him being 1,000 percent aggressive and having that mindset. The other two are freshmen, and they’re just learning.”

Bamba and Sims are gaining steam offensively down low, and both have shot-blocking prowess. Osetkowski is a banger who has eight 3-pointers in the past three games.

In this scenario, the coaching staff would have to determine which player is best suited to guard the other team’s bigs and who would take any swingman.

“I don’t think you use as necessary. I think we can definitely go to that a little more,” Osetkowski said. “It’s just on us to be successful and do good things while we’re in there and not go crazy with three bigs.

“If you have dudes 6-9, 6-11 who can jump through the roof, athleticism like crazy, every aspect of their game is unbelievable,” he added, “if you can have guys like that on the court at any given time, that would be good for the team.”

Bamba and Osetkowski are gladly taking Sims under their wing. They sandwiched the quiet athlete from Minnesota during Saturday’s postgame press conference and tried to coax him to smile at various times.

“Yeah, I need to talk on the court,” Sims said.

To which Bamba quickly interjected, “He’s going up against the best trash talkers in the country,” referring to practices against himself and Osetkowski.

Injury update: Guard Eric Davis Jr. did not play against Louisiana Tech after hurting his right wrist in practice. Smart did not indicate whether Davis would play against Tennessee State, either. Davis is probably a game-time decision.

The Longhorns are still hoping to get guard Andrew Jones back this month, they hope before the Big 12 opener against Kansas on Dec. 29. Jones suffered a hairline fracture in his right wrist in the Dec. 5 win over Virginia Commonwealth. He did not require surgery, though.