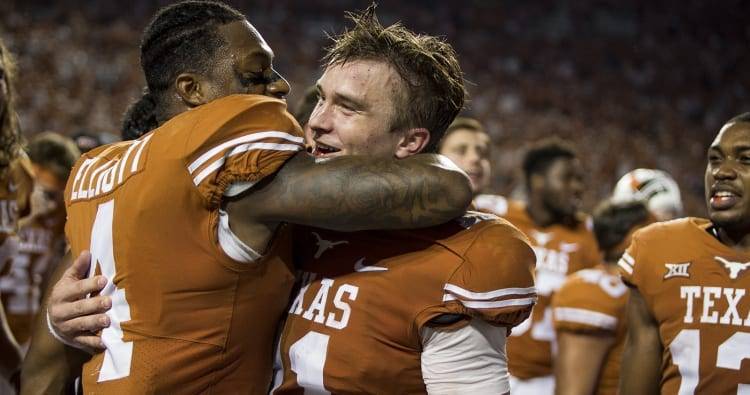 DieHards is counting down each Big 12 team’s best moment from the 2017 college football season, whether fun, momentous or disastrous. The University of Texas is up next.

Texas had so many games this season that could have been its top moment. In the third game of the year, freshman quarterback Sam Ehlinger led a near-comeback victory over No. 4 USC. The Longhorns were minutes away from beating No. 12 Oklahoma and No. 10 Oklahoma State too.

However, the best moment for Texas came in a wild game on Oct. 7. Kansas State came into the season as a prohibitive Big 12 title contender. Texas was in need of momentum after losing 2-of-3 during nonconference play. The true freshman Ehlinger was under center again for the Longhorns.

Kansas State took a 10-0 lead after an 82-yard pass in the second quarter, but Texas was ready for the challenge. The Longhorns went down 17-7 late in the second, but Ehlinger threw a 33-yard touchdown pass, and then led a late touchdown drive to give Texas a 21-17 lead at the half.

It was a back-and-forth second half, and Texas wasted several chances. Ehlinger led long drives that ended in missed Josh Rowland kicks. Luckily, Rowland nailed one to tie the game at 27-27 and send it to overtime.

Luckily, the buzz saw came out in overtime. Jerrod Heard came out in the Wildcat and threw a 25-yard touchdown pass on the first drive of overtime. Kansas State came back and scored nine plays later. But when they took over again, Texas’ elite defense picked up again.

Kansas State completed a pass, but then got called for a penalty to make it 2nd-and-13. Texas then caused a loss, and then Kansas State committed another penalty. Texas forced an incompletion on 3rd-and-21, and then Matt McCrane missed a 53-yard field goal. Texas scored a touchdown six plays later, three of them Chris Warren rushes.

The win moved Texas to 3-2, and helped entrench freshman Sam Ehlinger as a rising star. Ehlinger threw for 380 yards and 2 touchdowns. He also added 107 yards on the ground in a tremendous effort. Texas would not have gotten bowl eligible without this effort.

Make sure and keep tuned to DieHards for the best moment for each remaining Big 12 team in the coming days.

From Heard to Porter, Texas’ roster features a handful of state champions