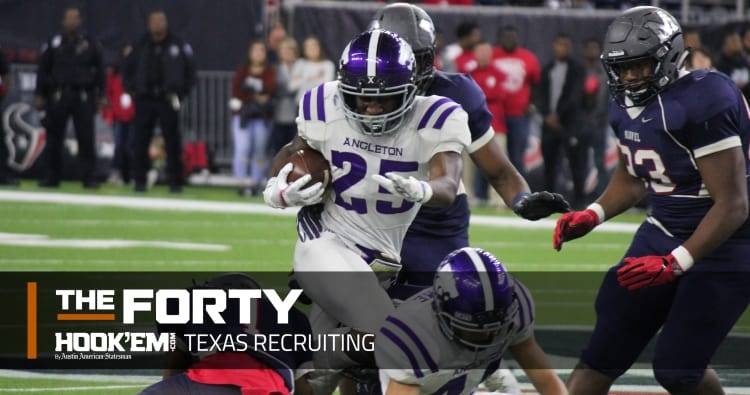 Foster, who spends most of his time at running back, will sign in this week’s early signing period and will enroll early at Texas. Expect the nation’s top-rated safety to compete for the starting spot vacated by DeShon Elliott.

“We did something special at Angleton and I’ll never forget this season and my town of Angleton,” Foster said Friday night. “I’m excited to get to Austin and compete. This 2018 class is coming to help Texas win football games.”

The 2018 class is ranked second in the nation and first in the Big 12. It’s also a class full of winners. Of the 19 commits, 15 made their state playoffs. Twelve of the 14 in-state commitments made the playoffs and nine of those reached at least the third round. Carthage running back Keaontay Ingram and Lake Travis kicker Cameron Dicker will play for a state title at AT&T Stadium in Arlington this week.

Offensive line will remain a priority for the Texas staff in recruiting the 2019 cycle. Javonne Shephard, a 3-star tackle from North Forest High School in Houston, included Texas in his top six on Saturday night, along with Houston, Texas A&M, Texas Tech, TCU and Oklahoma.

Shepard is a 6-6, 275-pound prospect who was offered by Texas on June 14 and has been on campus multiple times. Texas experienced success recruiting the Houston area in the 2018 class and don’t expect Tom Herman and his staff to move away from that foundation for the 2019 class.

Few juniors are watching their stock rise in the playoffs more than Lake Travis’ Garrett Wilson. The junior wide receiver has picked up offers from Oregon, Texas and Ohio State since the playoffs began and he continued to live up to the hype in his team’s victory over Katy in the Class 6A Division I state semifinals.

Wilson scored touchdowns as a rusher, receiver and passer in the 28-14 win over Katy. The 4-star junior finished the game with eight catches for 119 yards. Lake Travis faces Allen on Saturday at 3 p.m. at AT&T Stadium in Arlington.

Katy running back Deondrick Glass, a junior who holds a Texas offer, ran for 202 yards on 30 carries. He also holds offers from LSU, Alabama and others.

From Heard to Porter, Texas’ roster features a handful of state champions