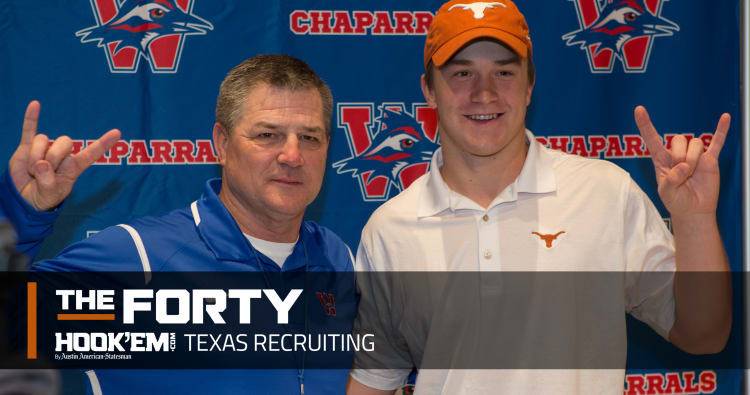 Christmas is arriving early for football programs around the country thanks to the new early signing period, which allows all 2018 prospects to sign their national letters of intent during a 72-hour period beginning Wednesday.

Not everyone will take advantage of the early signing period, instead waiting until the normal national signing day, which will fall on Feb. 7.

The picture of what will take place on Wednesday is starting to take shape, though there are still a few unknowns, especially for prospects choosing a school with a new coach and for those players that are still participating in the state playoffs like Carthage running back Keaontay Ingram and Lake Travis kicker Cameron Dicker, both Longhorns recruits who are preparing for state championship games this week.

It can all get confusing. That’s recruiting. But let’s try to figure out what we know and what we don’t know heading into this first ever early signing period.

That accounts for six of the current 18 Texas commits.

“If a guy knows where he wants to go, then this new signing period shouldn’t be a problem,” said Texas commit D’Shawn Jamison, a cornerback from Houston Lamar.

“We didn’t feel any pressure to sign early,” Jamison added. “We all just want to sign early to show where our heart is and to be done with the process.”

We also know a decent amount of the other commitments plan on signing during the early period. The only UT commitments not expected to sign this week are Spring Westfield defensive tackle Keondre Coburn and Utah offensive tackle Junior Angilau, who will serve a two-year mission before setting foot on Texas’ campus before the 2020 season.

So, if it goes as expected, the Longhorns should ink 16 players of the 18 current commitments by Friday, the end of the three-day early window. Most of the faxes are expected to roll in on Wednesday, with the first one expected at 7 a.m.

The best guess for the first Longhorn to sign would be Adeoye since he’s on Eastern time in Florida.

What we don’t know

Ingram and Dicker are expected to sign early and end the process, but it won’t be so easy for every player at each of the state championship-qualifying schools.

Take Manvel wide receiver Jalen Preston, for example. The Fabulous 55 member committed to Texas A&M before his senior season and now is switching his focus from football practice to meeting new Aggies head coach Jimbo Fisher to end-of-semester finals and deciding whether he wants to sign early or in February.

“I’m signing in February,” Preston said last Friday night after Manvel beat Foster’s Angleton Wildcats at NRG Stadium in Houston to advance to Friday night’s Class 5A Division I title game. “My main goal is to win a state championship. We’ve never done that at Manvel. Recruiting is in the back of my mind but I won’t let it be a distraction.”

His teammate, wide receiver Kam Scott, who’s committed to Missouri, is electing to sign during the early period. High school coaches are taking it in stride. Manvel will have two players sign Wednesday and the rest will wait until February.

“I don’t think (the early signing period) impacts much,” said Manvel head coach Kirk Martin, whose son, Kason, is committed to North Texas as a quarterback. “We do a pretty neat deal for their signing party. We will just do it twice now. Our kids are focused on the state championships. We will not let the signing party be a distraction.”

The toll is felt more for college coaches who are trying to ramp up recruiting efforts while dealing with bowl preparations and assistant coaching changes. It’s highly possible that a kid will sign to a school to play for a specific position coach on Wednesday only to find out that coach is being replaced on Thursday.

It’s uncharted territory. There are likely to be surprises and frustration. Texas could land 5-star cornerback Anthony Cook on Wednesday. He is set to announce at his school around 3:30 p.m. and it will be aired on ESPN. But it also wouldn’t be shocking if Texas adds another commitment or two, specifically on the offensive or defensive line, before signing day.

The post Countdown to signing day: What we know and what we don’t know appeared first on Hook ‘Em.