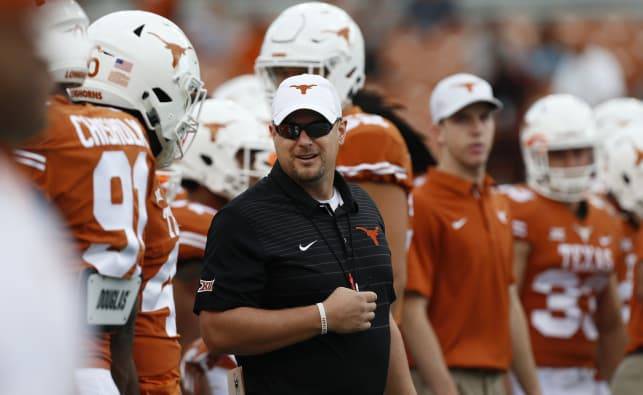 What sounds good on paper sometimes has unintended consequences. College football’s new early signing period is only the latest example.

College administrators and NCAA officials thought they were helping high school athletes by opening a three-day window starting Wednesday to sign national letters of intent. For those tired of the recruiting process, players can sign before Christmas and be done with it.

Anyone who wants to wait until the traditional signing day in February certainly can. But there may not be any spots left. And coaches may look sideways at any players who are committed now but want to wait and field more offers.

Texas coach Tom Herman hopes to sign three-fourths of his 2018 recruiting class, “which is great when it’s done,” he said. Two highly-touted quarterbacks, a slew of skill position talents and perhaps the nation’s best group of defensive backs are all ready to become Longhorns right now.

Texas could sign 14-16 players on Wednesday and more in February. At the moment, the Longhorns have the nation’s second-best recruiting class, according to the 247Sports composite ratings.

But Herman and his counterparts aren’t jazzed about what the industry has wrought. Coaches all over the country are having to juggle bowl practices, in-home and on-campus recruiting visits and make sure their current athletes finish up the semester academically strong.

Some fans will serenade these coaches with the world’s smallest violin. And those in the College Football Playoff might prefer their coaches spend time game-planning rather than gallivanting the countryside chasing the future.

Starting this week, college football is essentially heading into uncharted waters from a recruiting perspective.

“I didn’t like it when we did it. I don’t like it now,” Alabama coach Nick Saban said. “I don’t think it’s in the players’ best interest. I don’t see how it benefits anybody. It’s really stressful for everyone.”

Ohio State coach Urban Meyer thinks the accelerated timeline has forced administrators into making rash decision about hiring and firing coaches. “Yes, no question about it,” Meyer said. “People are, I don’t want to say panicking, because it’s rightfully so. It’s upon us fast.”

The upside for enrolling early is obvious. Connor Williams left Coppell early, enrolled at Texas in January 2015 got a head start on UT’s spring training regimen. He started as a freshman, became an All-American and is now a possible top-10 NFL pick prospect next spring.

The Longhorns expect to add seven mid-term enrollees, including 4-star quarterbacks Cameron Rising and Casey Thompson. Both will go through spring practice, which makes Texas’ quarterback derby between those two and junior-to-be Shane Buechele and sophomore-to-be Sam Ehlinger most intriguing.

“That’s a personal decision for them,” Herman said. “Does it help their development as freshmen? Certainly, there’s no denying that. But I certainly understand the guys that want to be a teenager and finish their final semester of high school, too.

Texas pledge Keaontay Ingram, the state’s best running back, was wavering on whether he would sign early. Ingram’s team, Carthage, faces Kennedale in the Class 4A Division I state title game on Saturday. “It’s tough to worry about signing day and recruiting when we’re trying to win another state championship,” Ingram told the American-Statesman.

But parents all over may lament the fact their sons left high school early, bypassing all that happens during the spring semester. “I don’t know it will become the norm, but it’ll be more normal for sure,” Herman said.

With some of these recruits, Herman is practically begging them to enroll early. Lake Travis kicker Cameron Dicker, who also is playing for a state title this week, will likely be an immediate starter for the Longhorns. Dicker has announced he will sign on Thursday.

Safeties B.J. Foster, Caden Sterns and DeMarvion Overshown will get a warm reception, too, now that All-American safety DeShon Elliott is NFL-bound. Foster and Sterns are expected to enroll in January, too. And considering this team’s lack of tight end depth, Malcolm Epps’ arrival will be welcomed by the Horns.

Herman praised his assistants for stressing relationships with these recruits, same as they do with the current players. The coach also said the current Longhorns are always the best recruiters around.

“When they’re positive about the program, when they sell it the way they have and the way they’re honest with these guys and tell them what it’s like to be a player in our program,” Herman said, “all three of those things — relationships, the university and our players — make it a pretty good sell.”