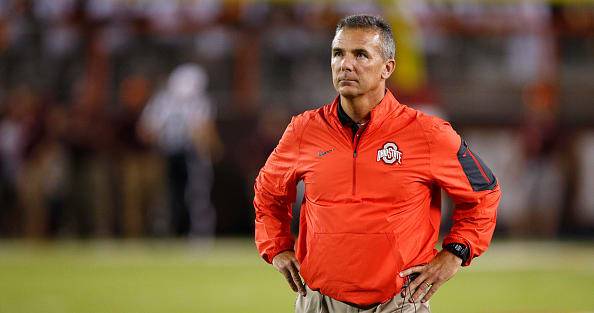 CORRECTION: Urban Meyer was addressing Land of 10 reporter Austin Ward, not referring to the city of Austin, Texas. The story has been corrected to reflect that.

The jury is still out on the early signing period in college football. Texas made its mark on Wednesday, grabbing 17 recruits including some heavy hitters from Houston.

By late afternoon, the Longhorns had the third-ranked class behind Ohio State and Georgia, and landed a pair of 5-star defensive backs in BJ Foster and Anthony Cook.

RELATED: A look at the potential positives and negatives of early signing period

Not everybody was happy to see Texas near the top of the charts, and Ohio State coach Urban Meyer made some particularly interesting comments during his National Signing Day press conference. Discussing his displeasure at schools potentially pulling offers from kids who don’t sign early, (starts at 5:25 in the clip below).

“A couple times, more than a couple, I got a comment back saying ‘Coach, this school is telling me if I don’t sign on (Dec. 20) I’m out. They’re taking my scholarship offer,'” Meyer said. “… So here’s a young person committed to this certain school, his dream is to commit for a school that you can compete for a national title.

“However, the school that’s competing at that level is saying ‘I don’t know’ because there might be five guys leave for the NFL Draft. But you know what, Austin (Ward), there might not be five guys. So what do you do? Well, you’re honest with them. And the comment back is, ‘Well, I think I have to sign with them because what if they pull my scholarship? Then I’m stuck with nothing.'”

The Ohio State coach did not mention any players specifically, but he might have been talking about Houston Lamar product Anthony Cook, who chose the Longhorns over the Buckeyes and LSU on Wednesday.

No matter how you slice it, few programs made a bigger splash with the early signing period than Texas. For Meyer, whose program has thrived off landing the best products from the Lone Star State, that has to be frustrating.