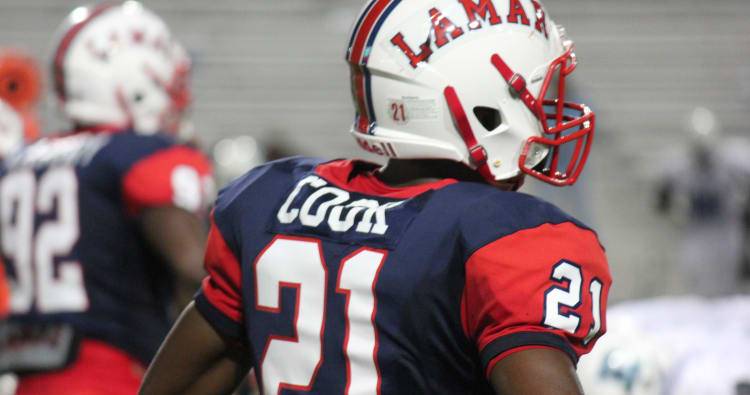 Texas added to its future secondary when 5-star cornerback Anthony Cook chose the Longhorns over LSU and Ohio State and became the 20th member of Texas’ 2018 recruiting class. The Houston Lamar product will enroll early to compete for the vacated cornerback spot left by Holton Hill when he declared early for the NFL Draft. He is one of six commitments expected to enroll early.

Cook gives Texas commitments from the top four players on the 2018 Fabulous 55, a year after each of the top 10 players left the state. It was a statement year for Tom Herman and his staff in their first full cycle and Cook was an exclamation point on the best class in the Big 12.

The 6-foot-1 cornerback will join teammates D’Shawn Jamison and Al’vonte Woodard at Texas, continuing the pipeline of secondary members from Houston Lamar to choose the Longhorns. The same school has produced Rod Babers, Holton Hill and John Bonney.

Texas will sign the best defensive back class in the country. Cook and Jamison will join 4-star cornerback Jalen Green, 5-star safety BJ Foster and 4-star safeties Caden Sterns and DeMarvion Overshown. Cook and Foster are the only 5-star products in Texas, per 247Sports Composite. All six of those players rank inside the top 20 of the Fab 55.

Cook, Foster and Sterns are set to enroll early, giving Texas immediate depth in the secondary after losing Hill and DeShon Elliott to the NFL and depth to graduation.

Players in the 2018 class who do not sign in the current three-day early signing period can sign Feb. 7. Texas currently holds the second-best recruiting class in the nation, trailing only Ohio State.

The post Texas stakes its claim with a commitment from 5-star cornerback Anthony Cook appeared first on Hook ‘Em.