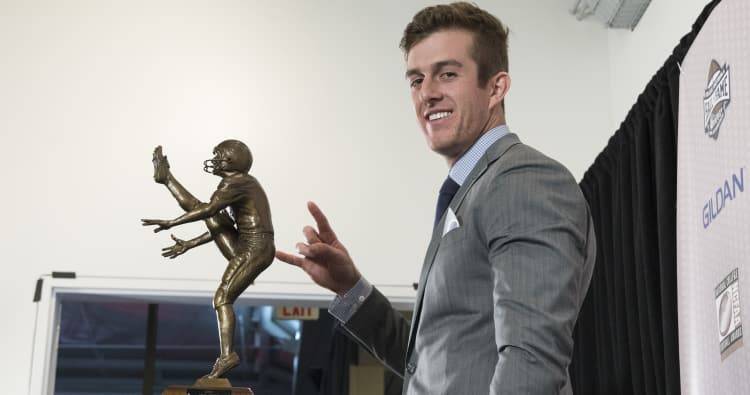 When Australian-born Michael Dickson stepped onto that plane headed to Austin in 2015, he had one sole mission — get to the NFL.

The Texas junior proved himself to be the best punter in college football this season when he won the Ray Guy Award. Now, Dickson is moving on. The school announced Thursday he will play against Missouri in the Texas Bowl and then go pro.

One of the best specialists the school has ever seen could have a lengthy, profitable career on Sundays for years to come.

“I am excited for the opportunities that lie ahead and know that I will forever be a Texas Longhorn,” Dickson said in a statement. “I’d like to thank Coach Herman and the current staff for a great year. Thanks for understanding and supporting me throughout my decision-making process.”

The decision to stay or go pro engulfed Dickson’s thoughts the last few weeks. In Atlanta for the College Football Awards show, it was obvious he was wrestling over what to do.

If Dickson stayed at UT for his senior season, his stock can only go down. Dickson led the nation in punting average (48.4) and had 34 punts go 50 yards or more. His career long was a 76-yarder against TCU this season. He also had a 69-yarder against Oklahoma and 67-yard boots against Texas Tech and Iowa State.

There were times this season you could make the case Dickson was the Longhorns’ most valuable player.

“Coming to play football for the University of Texas has been the greatest experience of my life,” Dickson said. “I am so thankful for coach (Charlie) Strong giving me an opportunity back in 2015. Texas has helped lead me in the direction I want to be as a person. I have built an undeniable bond with my teammates that will last forever. I truly consider all of you my brothers.”

Dickson said the UT fan base has shown more love “than I ever expected.” Frankly, they were witnessing a once-in-a-generation talent. Before Dickson arrived, Russell Erxleben was the school’s best punter. He left the Longhorns in 1978.

“To be able to see and hear the appreciation from the fans each week is something that I genuinely cherish. I’m so grateful for what this country has provided me and feel as though Texas has adopted me as one of their own. I’m proud to be a Texan.”

Dickson also thanked current UT coach Tom Herman for supporting him through the process. Herman had already found what he hopes is Dickson’s replacement. On Wednesday, the Longhorns signed Dickson’s cousin, Ryan Bujcevski, another product from the Australian Prokick academy based in Sydney, Australia.

“I will be wearing the burnt orange and white one last time as we take on Missouri in the Texas Bowl,” Dickson said. “I am excited for the opportunities that lie ahead and know that I will forever be a Texas Longhorn.”