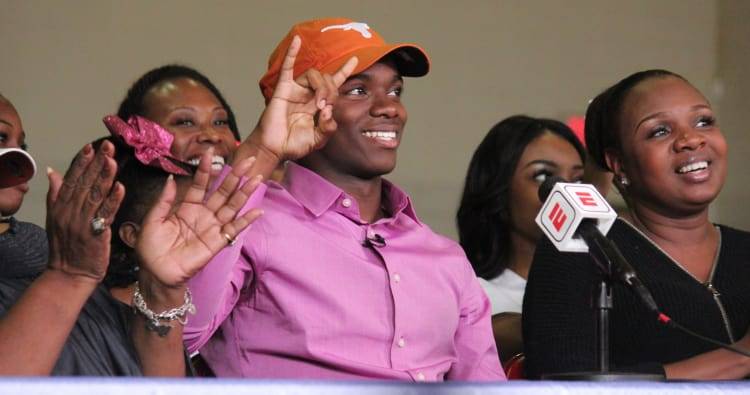 On the heels of his first signing day in Austin, in which Texas hauled in its worst-ranked class of the modern recruiting era, Tom Herman assured his Longhorns would finish the 2018 cycle with a top 10 class.

Early this week, the Horns took a considerable step towards bringing such promises to fruition.

On Wednesday, as the early signing period got underway, Texas inked one of its previously pledged commits after another. Once that excitement got underway, Anthony Cook, one of the top cornerback prospects in the nation, announced his committed to Texas over LSU and Ohio State. In doing so, along with providing each of the top five players in the state now Texas-bound, the addition of Cook cements what’s arguably the greatest defensive back class in the recruiting era.

As a result of such efforts on the recruiting trail, Sports Illustrated’s Chris Johnson named Texas as one of the winners of the early signing period.

“When Anthony Cook, a five-star cornerback out of Lamar (Tex.) opted for Texas over finalists Ohio State and LSU, it rounded out a staggering collection of top-shelf defensive backs that also includes the No. 1 (B.J. Foster), No. 3 (Caden Sterns) and No. 6 (DeMarvion Overshown) safeties in the class of 2018, as well as the No. 5 (Cook), No. 6 (Jalen Green) and No. 14 (D’Shawn Jamison) cornerbacks, according to the 247Sports Composite,” Johnson said. “Cook’s pledge also completed the Longhorns’ monopolization of top-tier high schoolers in one of the nation’s most talent-rich states: All of the top five and eight of the top 12 prospects in Texas signed with the Longhorns.”

Furthermore, along with the elite, in-state defensive back crop, Texas was able to hold onto 4-star IMG Academy inside linebacker Ayodele Adeoye, as well as land a much-needed commitment from JUCO offensive tackle target Mikey Grandy, who pledged to the Longhorns over UCLA.

As a result of Texas’ early signing period fortunes, the Longhorns officially singed 19 of their 21 incoming talents, with Houston Westfield defensive tackle Keondre Coburn and Carthage running back Keaontay Ingram as the exceptions.

As is, Herman’s first full recruiting class is ranked No. 3 nationally, per the 247Sports Composite. If Texas can hold its place at No. 3, it would mark the Longhorns best recruiting finish since Mack Brown’s No. 2-ranked haul in 2012.