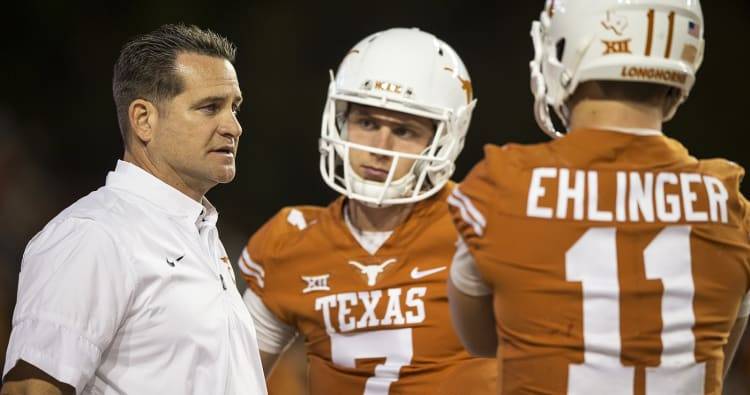 HOUSTON — Recent headlines have detailed the bevy of Longhorns who won’t play against Missouri on Wednesday. But what about those who will?

On Saturday, quarterback Shane Buechele hit the practice field in anticipation of his starting assignment in the Texas Bowl. Danny Young and Kyle Porter — the only two running backs available — were rotating with the first-team offense.

John Bonney and Josh Thompson were working in the secondary. Edwin Freeman, Demarco Boyd, Gerald Wilbon and Ta’Quon Graham were all getting practice time with the first-team defense up front.

Linebacker Malik Jefferson is listed as doubtful because of a serious turf toe injury. But he was dressed and spent 90 minutes inside the Houston Cougars’ practice facility running and cutting. He did not look like someone about to mail it in.

“To me, you’ve got to practice,” UT defensive coordinator Todd Orlando said. “It’s doubtful, yeah. But to me, how well are you going to play if you don’t practice? That’s how I feel.”

The Longhorns (6-6) have a ready-made excuse should things not work out against the 7-5 Tigers, winners of six straight.

Fans will say the Horns had little or no chance without starters DeShon Elliott, Connor Williams, Holton Hill and Chris Warren III, players who have all left the team early for various reasons. Or they’ll point the finger at Toneil Carter, Lil’Jordan Humphrey and Garrett Gray, three players who got themselves suspended for a violation of team rules.

Defensive tackle Chris Nelson will miss the game because of an elbow injury.

Also, safety Brandon Jones had to be escorted out of Saturday’s practice after looking woozy. He was being evaluated.

“I don’t ever feel like this year our players at one time cashed it in ever — ever,” offensive coordinator Tim Beck said. “We could play smarter at times offensively, for sure. But as far as their effort, their energy and playing hard to win the games, I never felt one time our guys didn’t do that.

“I certainly don’t expect that now. I loved our energy today.”

Buechele’s checklist: Buechele and freshman Sam Ehlinger rotated with the first-team offense in workouts leading up to UT’s arrival in Houston. But Buechele will get the starting nod, Beck and coach Tom Herman said.

“I think the biggest thing with him, he’s got to be a little better in the pocket,” Beck said. “That’s one of the issues right now, keeping us out of bad plays, negative plays. If we’re second-and-long, that’s not a good thing.”

Buechele started against West Virginia on Nov. 18 but gave way to Ehlinger after two drives. Ehlinger played the rest of the way as the Longhorns captured a 28-14 win. Buechele had a cameo role in the regular-season finale against Texas Tech, a 27-23 loss highlighted by Ehlinger’s interception on a critical third-and-2 play in the waning minutes.

Buechele has worked through shoulder and ankle injuries this season and thrown for 1,350 yards and six touchdowns.

Orlando staying put: In early December, Horns247 reported that defensive coordinator Todd Orlando interviewed for the SMU job. Herman indicated that report was not true in an interview with the American-Statesman.

In his first interview since the initial report, Orlando said the report was not true. “I’ll set the record straight on that thing,” Orlando said. “There was no interview.”

“I’ve been really, really honest with everybody, and everybody knows how I feel about this place,” Orlando said. “To me, this is the best job in the country; it really is. You look at the facilities and the educational value that we have and the way we can go out there recruitingwise and the things we can sell. I love this place.”

Extra work: Coaches love bowl games because it means 15 extra practices. That’s 15 extra days for freshmen who redshirted and sophomores who didn’t play all that much.

Beck praised freshman receiver Jordan Pouncey as someone who could have a breakout year in 2018. He also doted on freshman tight end Reese Leitao’s physicality.

“He runs well. He catches the ball well. I was really surprised,” Beck said. “I thought he was more of a guy that would slobber-knock you down inside there, but he can move pretty good.”

Briefly: The Longhorns were scheduled to attend the Rodeo Bowl on Saturday night. Players and coaches get a chance to go through various rodeo-themed contests against their Missouri counterparts. Some players will visit the Children’s Museum of Houston on Sunday. There are no scheduled bowl activities on Monday.