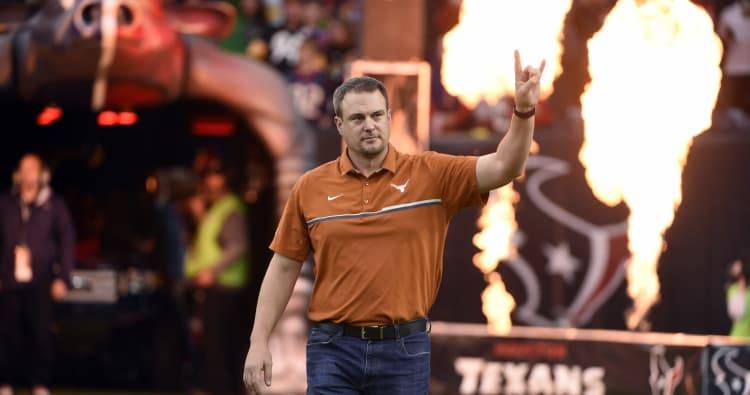 In August, new coach Tom Herman had supreme confidence this would be a bounce-back season for the program. No need to watch old game film, he believed. No need to examine how the previous coaching staff somehow bungled its golden opportunity.

And yet four months later, here are the Longhorns, sporting a 6-6 record heading into Wednesday’s Texas Bowl matchup with Missouri. One more loss and Herman will finish with the exact same record Strong did in his first season in 2014. One more loss will clinch the program’s fourth straight losing season, a first since the 1935-38 run presided over by Jack Chevigny and D.X. Bible. That 9-26-2 stretch is easily the worst in UT football history.

Asked Tuesday what he’s learned in his first season, Herman said, “That three straight losing seasons takes its toll on kids. It really does. It’s difficult for them, especially when you deal with adversity, it can be a here-we-go-again syndrome.

Herman said the players want to compete, they want to be great, “but it’s been a challenge to reprogram a lot of these guys.”

Texas’ long-term problems will not be solved in three hours at NRG Stadium. On paper, it appears to be a cakewalk for the 7-5 Tigers. The Longhorns are without All-Americans Connor Williams and DeShon Elliott, who are going pro. Cornerback Holton Hill was still suspended, so he left the team, too. Tight end Chris Warren III is transferring.

Linebacker Malik Jefferson (turf toe) tried to get healthy enough to play but couldn’t. The team’s leading tackler also will miss what is likely his last game before going pro as well. Defensive tackle Chris Nelson (elbow) also is sidelined.

“I ain’t really trippin’ about their decisions,” UT senior defensive tackle Poona Ford said. “Everybody’s got a dream, so if it’s right in front of you, why not go get it? I’m happy for those boys and the decision they made. I’m sure it’s going to pan out great.”

Said senior receiver Lorenzo Joe, “All of those guys worked hard, and they have the right to do what they want.”

Missouri coach Barry Odom wasn’t taking the bait, though. “I know this, they’ll have 11 guys out there when we start the game and so will we,” he said.

Losing feels like an inescapable morass at times. The Horns were without two offensive tackles and a starting tight end when Big 12 play began. They had two quarterbacks, but both got hurt at various times, too. Winnable games were literally thrown away against Oklahoma State and Texas Tech.

The defense steadily got better as the year progressed, but it finally collapsed under the weight of carrying the entire team. It spoke volumes that the team’s most valuable player at times was punter Michael Dickson, the Ray Guy Award winner.

At least Herman and his staff conquered the recruiting trail. Texas signed what is considered the nation’s third-best recruiting class so far for 2018. “This class had to be good,” Herman said. “It’s not just good, it’s great.”

The class includes two highly-touted quarterback signees who both will enroll early, meaning Shane Buechele and Sam Ehlinger will be back at square one this spring against newcomers Casey Thompson and Cameron Rising. Buechele will start against the Tigers, but Ehlinger is expected to play.

There are other reasons to be optimistic about the future. Texas still hopes to sign Keaontay Ingram, possibly the state’s best running back prospect. And the crop of defensive backs is expected to be the nation’s best.

But for one more night, the Horns must carry forth against an SEC team that comes to Houston having won six straight. Quarterback Drew Lock has thrown 43 touchdowns — two more than Heisman Trophy winner Baker Mayfield.

Never heard of Drew Lock? Don’t feel too bad. The junior from Lee’s Summit, Mo., is the eighth quarterback in Mizzou history to throw for more than 5,000 career yards. “It also started with how we started the season,” Lock said. “You’re not going to talk about a 1-5 football team.”

Odom, Lock and the rest of the Tigers somehow figured out how to break their losing ways. Missouri went 5-7 in 2015 and 4-8 last season. This year’s 1-5 start had fans at their wit’s end. Midseason wins over Idaho and Connecticut merely stopped the bleeding. But then came victories over Florida, Tennessee, Vanderbilt and finally Arkansas.

Outsiders have scoffed at that string, nothing that all six of those opponents finished with losing records. Mizzou also lost two offensive assistants, including play-caller Josh Heupel, after the regular season.

So are these Tigers any good or not?

“We’ve got plenty of motivation,” Odom said. “I wouldn’t want to be lined up with another team in American trying to get that done.”

Perhaps a better question: Are these Longhorns motivated or not?

How bad does this team truly want to win? Are these Longhorns tired of being labeled as losers? For three hours on Wednesday, Texas fans can judge for themselves.

“We haven’t been in a bowl game in three years,” Herman said, “so if that doesn’t excite you as a player, then you probably need to quit football and go do something else. Go join a club or something like that.”

The post Long-term outlook may be bright, but undermanned Texas must first tangle with Missouri appeared first on Hook ‘Em.