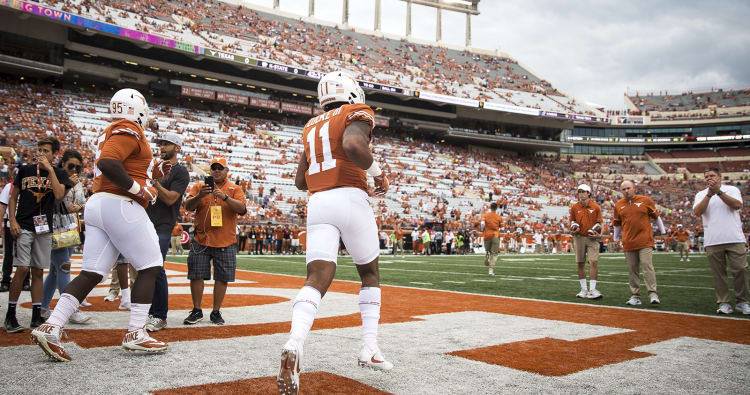 HOUSTON — Every week this fall, we’ve been looking at a specific number that’s tied to Texas football.

This week’s notable number is 8.

Eight is the number worn by receiver Dorian Leonard, although his senior season has been ended by a foot injury. Sophomore Shane Buechele, who will start at quarterback in Wednesday’s Texas Bowl, has accounted for eight touchdowns. In eight games. (Freshman Sam Ehlinger has 12 total touchdowns in eight games).

Eight also represents the interceptions logged by Longhorns who won’t play in the Texas Bowl.

Safety DeShon Elliott (six) and cornerback Holton Hill (tw0) have accounted for eight interceptions this season. Texas has picked off 15 passes, a number bettered by only 19 teams in the country. Elliott and Hill, however, have already declared for the NFL draft and will not be available to face a Missouri team that ranks 14th nationally in passing offense.

Hill was suspended for the season on Nov. 7, so Texas has already adjusted to his loss. (Junior Davante Davis has started opposite Kris Boyd in UT’s last three games). Texas coach Tom Herman confirmed on Tuesday that junior P.J. Locke III will replace Elliott as the Longhorns’ boundary safety.

Locke has started seven times at nickel back in 2017, but he missed the last four games with an ankle injury. UT will continue to use senior Antwuan Davis as its nickel back on Wednesday. Senior Jason Hall, who has been listed as Elliott’s backup, will stay in his role as a sixth   defensive back.

“Me and P.J., we compete all the time. I can honestly say, having him out there with me, we’ve been waiting to see how that works out,” Davis said. “I expect some good things to happen out there.”

This season, the 6-foot, 205-pound Locke has registered 32 tackles and a pass breakup. His two career interceptions were recorded in 2016.

Locke has some familiarity with the safety position. He was originally a safety at Texas before transitioning to nickel back during his freshman year. Safeties coach Craig Naivar has been Locke’s position coach throughout this season.

“P.J.’s looked great, especially as we started to install the game plan, if you will, for Missouri,” Herman said.

In addition to on-field ability, Locke also will provide Texas with on-field leadership. Locke is one of UT’s five captains, and Davis described him as “a guy, he’s going to speak his mind.”

Herman, though, pointed out Tuesday that defensive lineman Poona Ford and linebacker Naashon Hughes are the only captains who have played in every game. Left tackle Connor Williams was limited by a knee injury to five games, and he has left to prepare for the draft.  A fractured foot has sidelined tight end Andrew Beck all season.

“Just having (Locke) back in the lineup, it’s just going to be better for our defense,” Ford said. “He’s a communicator out there … we’re going to need that because they have some good skill players.”

Nov. 17: 38, and comparing Will Grier to Baker Mayfield

The Eyes of Texas: 3 Missouri Tigers the Horns will be watching