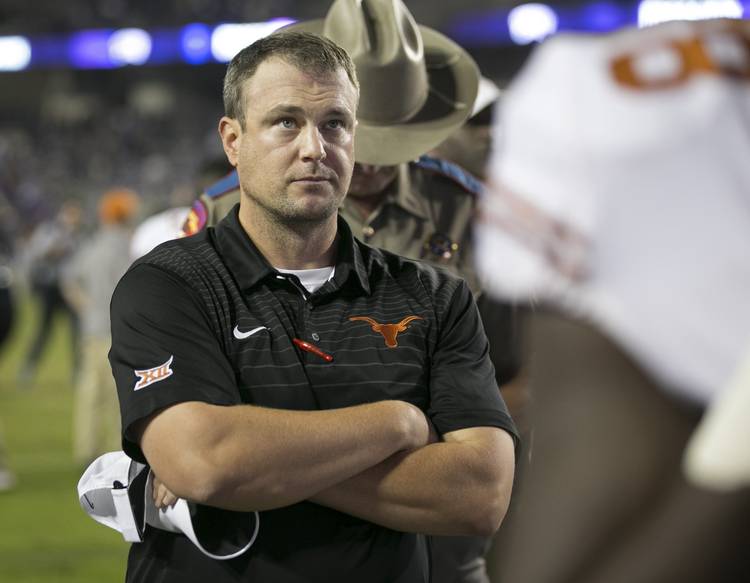 Head Coach Tom Herman waits for the school song after the loss to TCU at Amon G. Carter Stadium in Fort Worth on Saturday November 4, 2017. JAY JANNER / AMERICAN-STATESMAN

1. Who’ll head into the offseason as Texas’ quarterback?

Once again, Shane Buechele and Sam Ehlinger should both play. Ehlinger has more passing and rushing yards to his credit, but his turnovers were costly in losses to USC, Oklahoma State and Texas Tech. Buechele, meanwhile, has thrown for 1,350 yards and has proven to be UT’s more accurate passer. With Cameron Rising and Casey Thompson — the first quarterback recruits truly tied to the Tom Herman era — coming, can either of the incumbents state their case for the job?

2. Will there be questions or answers on the offensive line?

Elijah Rodriguez, who was expected to start at right tackle this season before an ankle injury in August cost him his regular season, is expected back for this game. Left tackle Connor Williams, however, won’t be there since he has already begun his preparations for the NFL draft. There also are health questions about left guard Patrick Vahe’s knee as well as the futures of right guard Jake McMillon and center Terrell Cuney. Texas has already started seven different combinations on its offensive line this season.

3. Which senior will shine in his final game?

Connor Williams and DeShon Elliott are going pro and skipping the Texas Bowl, Holton Hill is going pro and will miss the game as well, and Malik Jefferson will miss it with a turf toe injury. But for sure, Wednesday marks the end of more than a dozen Longhorns’ college careers, including seniors Armanti Foreman (four touchdown catches), defensive back Antwuan Davis (two interceptions), linebacker Naashon Hughes (30 tackles) and defensive tackle Poona Ford (eight tackles for loss). All those players could stand out in their final game.

4. Will Tom Herman’s first season end on a high note?

Texas is looking to gain some of that proverbial momentum heading into the offseason, and a bowl win would certainly help. Recent history, though, doesn’t support the Longhorns. Texas (6-6) hasn’t posted a winning season since it went 8-5 in 2013. Texas is 27-24-2 all-time in bowl games but hasn’t won one since a 31-27 win over Oregon State in the 2012 Alamo Bowl. In the last bowl game the Longhorns played, they were bumped by Arkansas in the 2014 Texas Bowl.

Long-term outlook may be bright, but undermanned Texas must first tangle with Missouri