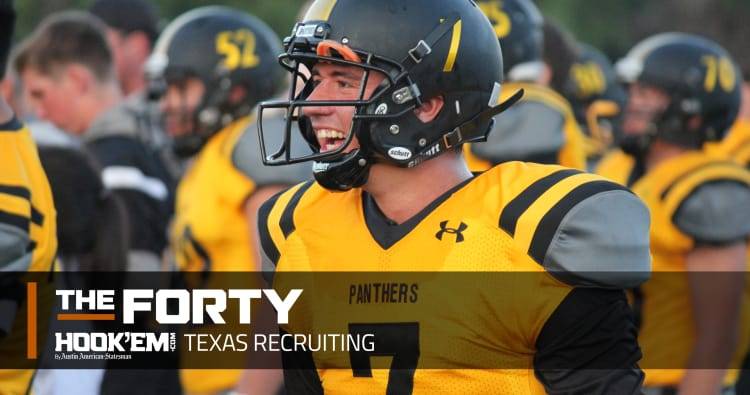 Texas signed 19 prospects during last week’s three-day early signing period. The Longhorns took full advantage of the ability to lock in players to national letters of intent early for the first time after an NCAA rule change. Texas signed all but two of its commitments and the 2018 class currently ranks third in the nation behind Ohio State and Georgia and first in the Big 12.

Expect the Longhorns to add 5-8 more commitments before the next signing period on Feb. 7.

Here are the current grades at each position unit for the offense, which includes two out-of-state quarterbacks and a stable of future options along the offensive line. We’ll look at the defense in Thursday’s Forty.

Texas did a great job holding on to both Thompson and Rising throughout the recruiting cycle. The duo will enroll early and immediately push the quarterback room occupied by Shane Buechele and Sam Ehlinger. The Longhorns hope Thompson and Rising can push both incumbents and provide immediate depth. Expect one of the two to redshirt.

Rising is a 4-star quarterback from Newbury Park in California. The 6-2 prospect was ranked as the No. 9 pro-style quarterback in the nation, but he runs well enough to cause problems for defenses. He’s recovering from surgery to repair a torn MCL suffered at the end of his senior season but expects to be ready for spring practice.

Thompson is prototypical Tom Herman quarterback. He set the Oklahoma high school record for career passing yards. He’s also capable of taking over games with his legs. The dual-threat quarterback is a 4-star prospect who was a national top 300 player, per 247Sports Composite.

Texas holds a commitment from Ingram, the best running back prospect in the state. The problem, from a Longhorns perspective, is that the 4-star prospect from Carthage didn’t sign during the early period because his team was busy preparing for a state championship game. Ingram rushed for more than 5,000 yards in his prep career and won a state title as a junior. He’s also a prolific wide receiver out of the backfield.

The Longhorns are still in good position and would likely have received Ingram’s national letter of intent had Carthage not still been in the playoffs. Ingram wants to play for Texas running backs coach Stan Drayton and he should get a chance to earn carries as a true freshman if he signs on Feb. 7.

The Longhorns held commitments from a trio of 4-star receivers until Kentucky’s Rondale Moore decommitted before signing day. He’s expected to stay closer to home and play at Purdue. Losing Moore doesn’t outweigh the positives of signing Eagles and Woodard, however.

Texas signed two of the state’s three top-rated outside receivers, missing out only on Texas A&M commit Jalen Preston. The Longhorns would like to add a slot receiver and possibly another outside receiver before Feb. 7.

Eagles is expected to enroll early and immediately compete for snaps at a position needing consistency and big plays. The 6-4 prospect offers both. Woodard is a project and may need a redshirt season to refine his technical skills. He’s a great vertical threat and is part of the Houston Lamar trio that signed with Texas.

Texas might stand pat at tight end with Spring Dekaney’s Malcolm Epps in the bag. The 6-6 tight end isn’t physically ready to be an in-line blocker, but his sheer height and length makes him a potential nightmare matchup on third down and in the red zone. The 4-star prospect has a big catch radius and does a good job using his hands to catch the ball.

The Longhorns once had two tight ends committed, but JUCO product Dominick Wood-Anderson de-committed during the season. With attrition and NFL declarations freeing up scholarships, it wouldn’t be surprising for the staff to add a late addition to the tight end room.

The offensive line was a concern for the 2018 class until the final stretch before the early signing period. Texas added Angilau, a 4-star high school prospect out of Utah, and then Grandy, a JUCO product who chose Texas over UCLA despite hailing from California. Grandy should compete instantly at left or right tackle.

Angilau is the most college-ready of the trio of high school signees, but he could take a two-year LDS mission before enrolling at Texas. Moore played tight end at Seminole and likely needs a year to add weight and learn the position. Ghirmai, a 4-star from Frisco Wakeland, could add depth in year one.

The Eyes of Texas: 3 Missouri Tigers the Horns will be watching

Breckyn Hager to wear Tommy Nobis’ No. 60 in the Texas Bowl