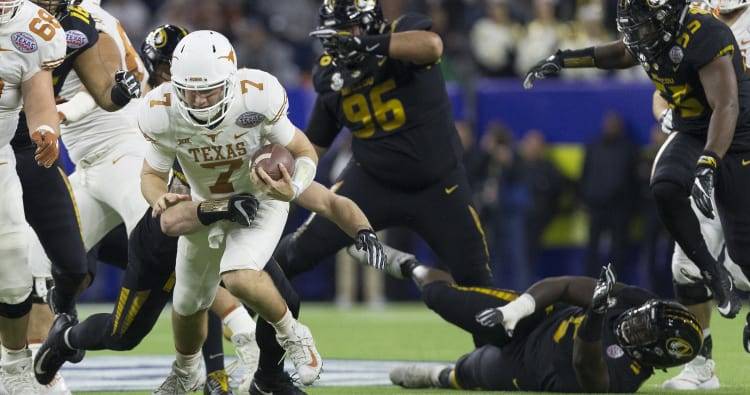 It’s halftime at NRG Stadium. Texas is leading Missouri in the Texas Bowl, 21-7.

The Longhorns are 2 1/2-point underdogs tonight.

Both teams are making their first bowl appearance since 2014. With all that’s working against the Longhorns — key starters Connor Williams, DeShon Elliott, Holton Hill and Malik Jefferson out; down to two running backs and only one tight end; and Missouri quarterback Drew Lock leading the country in touchdown passes — it’s Texas that’s making the majority of plays both offensively and defensively. The ball is literally bouncing the Longhorns’ way.

Missouri has won six straight games after a 1-5 start to the season. This is the first time the Tigers have trailed at halftime in eight games.

And Lock has yet to throw a touchdown.

1. Even without Elliott, even without Jefferson and even without Hill, the defense is coming up with big plays. Anthony Wheeler, starting for Jefferson, returned a fumble for a touchdown. Breckyn Hager, wearing the late Tommy Nobis’ revered No. 60 tonight, has a fumble recovery and a sack. P.J. Locke III, starting for Elliott, forced the fumble that Wheeler returned. Davante Davis forced another.

2. Daniel Young, the freshman running back from Spring, is having a nice night. He’s averaging 6.2 yards per carry, has broken off three nice runs and scored the first touchdown of the night on a 22-yard catch out of the backfield.

3. High points for the Horns so far?

Another strong performance by Michael Dickson, the Ray Guy Award winner who’s playing his final game as a Longhorn. The eye-popping yards on his punts aren’t there — he’s averaging 38.9 yards on seven kicks — but he continues to make a difference in terms of starting field position. Six of his punts have been downed inside the 20, which has forced Mizzou into these starting field positions: the 11, 16 and 5.

The Longhorns have not committed a turnover. Missouri has two.

Texas has had nine drives — six quarterbacked by Buechele, three by Ehlinger. Here’s how those drives have played out:

Missouri, which won the opening coin toss, will get the ball to start the second half.