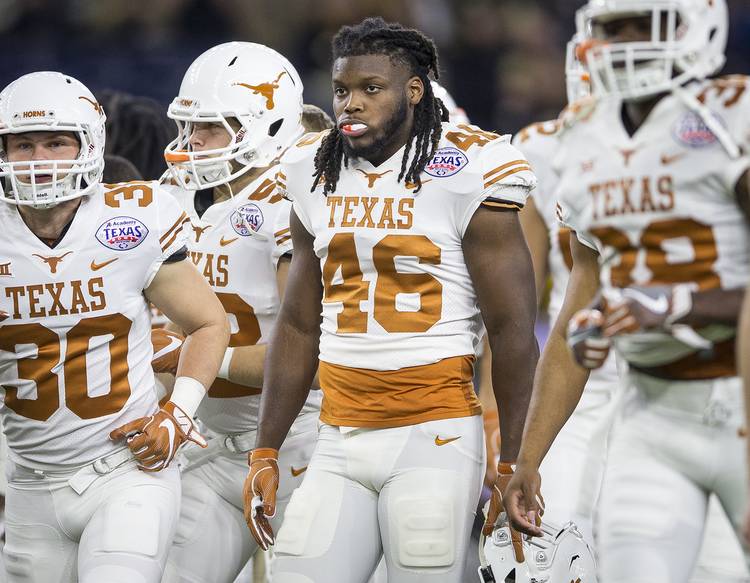 And now, it's official. Malik Jefferson has been ruled out again after pre-game warmups. Doubtful we see him play for Texas again.

7 p.m. update: UT announced that Malik Jefferson will go through pre-game warmups to see how his foot was feeling. He is now listed as a game-time decision.

HOUSTON — Texas coach Tom Herman said he was hoping for a “miracle,” but linebacker Malik Jefferson will not play in the Texas Bowl against Missouri, the coach said.

Jefferson, the team’s leading tackler, is suffering from a severe turf toe injury that bothered him in the final few games of the regular season.

He saw a specialist in Wisconsin and was doing everything possible to get cleared. In bowl practices open to reporters, Jefferson was seen running and cutting while wearing helmet and shoulder pads. Jefferson did not look like a player just going through the motions.

In the run-up to Wednesday’s game, Herman never said Jefferson would not play, although many suspected the linebacker wouldn’t to protect his NFL draft status. Jefferson has not commented about his future and has not been made available to reporters since the end of the regular season.

Had Jefferson played, he likely would have worn jersey No. 60 to honor the legendary UT linebacker Tommy Nobis. Instead, linebacker Breckyn Hager will wear the jersey. His father, Britt, also wore No. 60 during his All-American career with the Longhorns.

Breckyn Hager to wear Tommy Nobis’ No. 60 in the Texas Bowl