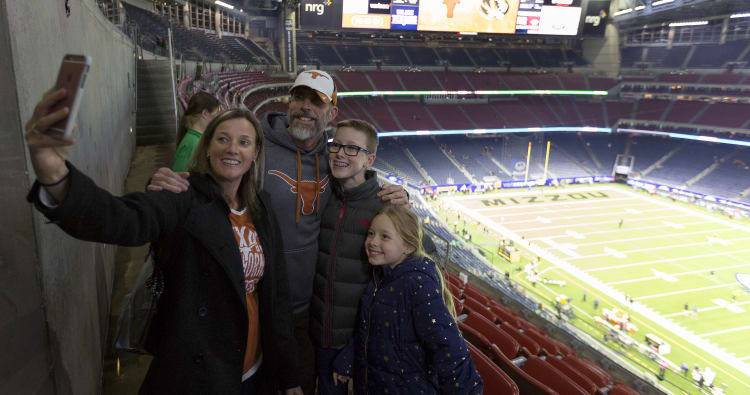 It has been a little while since Texas football fans had a bowl to attend. Three years, to be exact. That changed Wednesday as the Longhorns played Missouri in the Texas Bowl at NRG Stadium in Houston.

Check out the scene as fans post their best selfies, Bevo photos and hot takes. Check back throughout the game as we update this post with fresh content.

This has been submitted. pic.twitter.com/clsi5HfG0r

Hey @TexasBowl, if you don't give Michael Dickson the MVP award for this game, I'll boycott Academy for the rest of my life.

Michael Dickson becomes the first punter in the nation this year to have 9 punts inside the 20 yard line in a single game.

Without Dickson Texas would be down 20 right now

#Texas is the first team in #AcademyTexasBowl history to force and recover fumbles on consecutive drives. Western Michigan recorded interceptions on back-to-back drives in the 2008 Texas Bowl as the only other team to also notch takeaways on consecutive possessions

Enjoying some Texas football with our Future Tiger. #texasbowl pic.twitter.com/e20H7L9FYH

When you are the UT bowl game and the 🐐🐐🐐 shows up and is sitting 2 rows behind you! Jonah was in awe! @VinceYoung10 pic.twitter.com/Adyt6krzM2

Good luck to my brothers tonight. I’ll be there supporting. #HookEm 🤘

Good luck to my longhorns, some their last bowl and some their first, never forget the times you had with this squad and never forget Hook Em! pic.twitter.com/3y8enwhjrs

So greatful to be in Houston and that Cade gets to cheer on his Longhorns! Fun night ahead…. pic.twitter.com/TYDsEWFw9S

The #Longhorns have done a good job of filling The #TexasBowl . Wait until we’re really good again. pic.twitter.com/kM3Ku3Pcig

UPDATE: After warming up, Texas LB Malik Jefferson ruled out of Texas Bowl