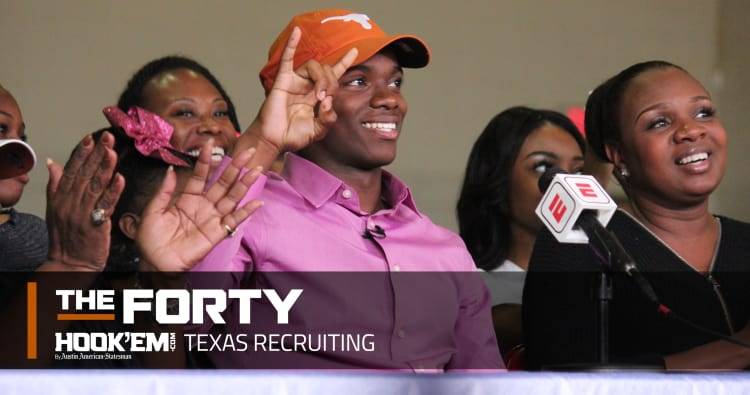 The state of Texas was stocked with elite talent in the defensive secondary and the Longhorns earned signatures from nearly all of them during last week’s early signing period. Six of the 19 letters of intent faxed to Tom Herman’s program on Dec. 20 came from 4- or 5-star defensive backs.

Texas also signed two linebackers. The defensive line is the alarming position moving into January and Texas needs to add prospects to the mix while also holding on to its current 4-star commit. Expect the Longhorns to add 5-8 more commitments before the next signing period begins on Feb. 7.

Here are the current grades at each position unit for the defense. We graded the offense in Wednesday’s Forty.

The top priority for Texas is holding on to the commitment of Coburn, a 4-star defensive tackle from Spring Westfield. Coburn committed in August but chose to wait until Feb. 7 to sign while he mulls over his decision for another month. Coburn is the best defensive tackle in the state and a perfect fit for the odd-man front employed by Texas defensive coordinator Todd Orlando because he can play defensive tackle or strong-side defensive end, like Chris Nelson.

Texas would like to add another tackle next to Coburn and the top candidate is Moro Ojomo, a 3-star from Katy. Ojomo is watching his stock rise after not signing during the early period now that colleges are scrambling to find big bodies in January. Since Dec. 20, he’s picked up offers from Texas A&M, Tennessee, Oregon and Notre Dame.

The situation at end is murky. Joseph Ossai, a 4-star from Conroe Oak Ridge, is the best uncommitted option left in the state, but he’s leaning toward Texas A&M. The Longhorns like Oklahoma product Courtre Alexander. Watch for new offers to go out at the position if Ossai and Alexander go elsewhere. Missouri product Daniel Carson also holds an offer and didn’t sign during the early period.

Texas let out a sigh of relief when Adeoye faxed in his letter late on Dec. 20. He’s a key piece to the defensive class and is needed to compete for snaps at middle linebacker next to Gary Johnson as a freshman since Malik Jefferson is likely headed to the NFL draft. Oklahoma made a late push for Adeoye.

Hobbs is a raw outside linebacker with huge potential on the edge because of his length at 6-4 and his natural athleticism. He thrives as a pass rusher and can play in space against the run and the pass.

The Longhorns wouldn’t mind adding another play-maker on the outside like Nik Bonitto (Fla.) or DaShaun White, who is committed to Texas A&M but chose not to sign early. Oklahoma also is in the picture for White.

The Longhorns capped off an illustrious defensive back class by gaining the pledge of 4-star Houston Lamar cornerback Anthony Lamar on Dec. 20, joining Jamison, a fellow Houston Lamar prospect. Cook and Green are the best two outside cornerbacks in the 2018 class and Jamison is a nickel specialist who also excels as a kick returner.

Texas hit a home run at safety and locked in the trio of stars early. Foster, the lone consensus 5-star in Texas for 2018, was a ringleader for the class and will enroll early to compete for snaps. DeMarvion Overshown is a hybrid defender who can play linebacker or safety, while Caden Sterns, a 4-star from Cibolo Steele, was a one-time LSU commit. Sterns also will enroll early.