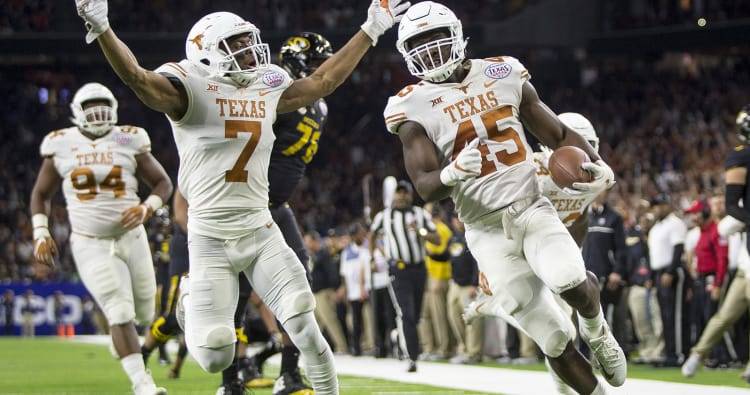 HOUSTON — As it heads into the offseason, Texas will attempt to answer some questions on its roster.

Who will be the quarterback in 2018? Can the Longhorns establish a running game? Who will replace DeShon Elliott and Holton Hill in the secondary? How much of an impact will the departure of punter Michael Dickson have?

There also will be questions about the linebackers. Junior Malik Jefferson might be in the NFL next year, and Naashon Hughes is a senior. Following juniors Anthony Wheeler and Gary Johnson’s performances in the Texas Bowl on Wednesday night, however, defensive lineman Breckyn Hager said he’s not concerned.

“We’re going to be just fine with our linebackers,” Hager said following a 33-16 win over Missouri at NRG Stadium.

For the Texas Bowl, the Longhorns un-retired the number of legendary linebacker Tommy Nobis. Hager, who 0pened the season as a linebacker, wore No. 60 as a tribute; Nobis, 74, passed away earlier in the month.

Fans also were monitoring the status of Jefferson, the all-conference linebacker and team leader in tackles. Battling turf toe, Jefferson went through a portion of warmups but was ruled out. He spent the game on the sidelines wearing his jersey and a pair of burnt-orange pants.

Johnson led the Longhorns with his 10 tackles, eight of which came in the first half. Wheeler chipped in six, and his 38-yard score off a fumble recovery gave UT a 21-7 lead in the second quarter. With 390 yards of offense, Missouri was held under its season average in points (39.3 per game) and yards (511.5 per game).

A highly-rated signing out of Dodge City Community College, Johnson made seven starts during his first year at Texas. He ended the year with six straight starts and was UT’s middle linebacker in five of those games. He finished the season with 60 tackles and two sacks.

Against Baylor on Oct. 28, Johnson replaced Wheeler in the starting lineup. That pushed Wheeler, whose 65 tackles led UT in 2016, into a complementary role on defense and special teams. Wheeler said he was content with contributing but Jefferson’s absence did provide a showcase.

“(Wheeler’s) not a freshman,” Johnson said. “He started the majority of the season, and I stepped up and came in for him.  Once we found out that Malik wasn’t going to play, we already knew that Wheeler would be prepared.”

Wheeler started at his old position while Johnson replaced Jefferson at rover. Despite Wheeler’s increased playing time, Hager was quick to point out that his “best friend” wasn’t derelict in his other duties. Hager said that following the fumble return, Wheeler stayed on the field for the ensuing kickoff and defensive series.

“I was over there, dying just celebrating with him, trying to catch (my) wind,” Hager said. “He’s an animal.”

“He always tells me the more tired I am, the stronger I get,” Wheeler later replied. “I kind of go off that,”

Wheeler was penalized for targeting in the fourth quarter, and he was ejected following an official review. By rule, he must sit out the first half of next year’s season opener at Maryland.

The post Minus Malik, Texas linebackers were led by Gary Johnson and Anthony Wheeler in bowl romp appeared first on Hook ‘Em.