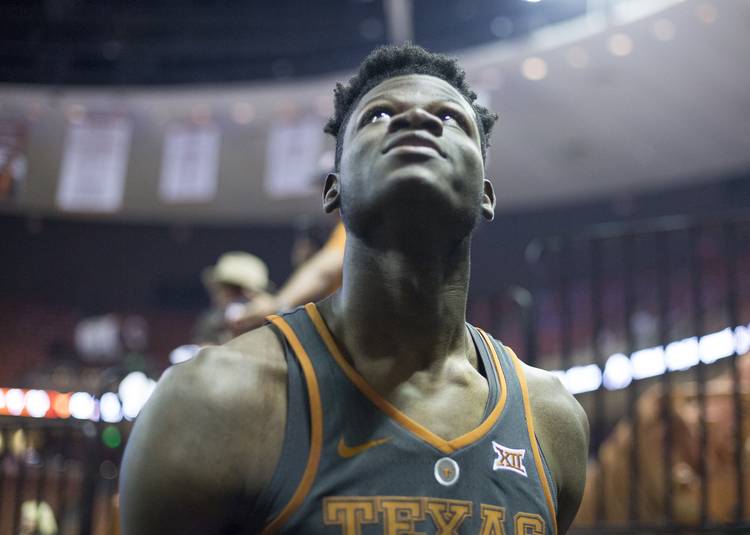 Texas' Mohamed Bamba (4) exits the court after a 82-58 win over Florida A&M during a NCAA basketball game at the Frank Erwin Center Wednesday, Nov. 29, 2017. (Stephen Spillman / for AMERICAN-STATESMAN)

Just by wearing that famous jersey, Kansas players know they’re in for a dogfight every single night. It’s been that way for decades, especially the last 13 years as the Jayhawks have won one Big 12 men’s basketball title after another.

Plenty of Longhorns in recent years were motivated by the scouting report. Isaiah Taylor had 17 points and eight assists at Allen Fieldhouse. Jarrett Allen went off for 22 points and 19 boards in a game last year. Both came in losing efforts, though. Both are now in the NBA.

The highly touted Texas freshman doesn’t have to be a superstar against the 11th-ranked Jayhawks. But the Longhorns (9-3) would welcome a truly breakthrough performance as the curtain rises on the Big 12 schedule.

“I would just sit here and say that it’s just like every other game. But it’s not. In a big way, it’s a statement game,” Bamba said after Thursday’s practice. “It’s a statement game because it’s Kansas. Kansas has won the league for the last 13 years. Our coaches give us confidence, and we think we can get out and beat ’em.”

RELATED: Preview: No. 11 Kansas vs. Texas

The school announced there were about 1,000 tickets remaining for the 8 p.m. tipoff at the Erwin Center. If Longhorns fans don’t scoop them up, Jayhawks fans definitely will.

“Somebody said, ‘Is this a hard opening game?,’” Kansas coach Bill Self told local reporters. “And the answer would be, hell yes it is, but anybody we play would be a hard opening road game.”

Kansas has a terrific following on the road, and why not? Self has consistently fielded terrific teams, and this bunch, currently 10-2, is cut from the same mold. The Jayhawks are one of eight teams nationally that have five players averaging 10.4 points or more. That includes Lagerald Vick, who ranks fourth in the Big 12 at 17.1 points per game.

“It’s not every day you get to play against a Hall of Fame coach like Bill Self,” UT guard Eric Davis Jr. said. “National TV, being able to play for Texas, it’s an opportunity. Just go out there and have fun.”

Texas guard Andrew Jones, who has missed most of December with a fractured right wrist, may be able to play. He’s still not 100 percent, though, said coach Shaka Smart. Jones was averaging 15.3 points per game before his injury.

So it’s incumbent on Davis to step up and hit open shots, much like he did against Alabama. Guard Matt Coleman has to be smart with ball distribution. Kerwin Roach Jr. must play his typical lock-down defense. The offense should go through Dylan Osetkowski at the high post.

And perhaps most of all, this team needs Bamba to be the energetic, budding star the coaching staff believes he can be.

Bamba has finished in double figures in five of the last six games, posting double-doubles in three of them. But he got frustrated against Tennessee State after one of their forwards went right at him and scored. Big 12 teams will challenge him for the next 18 games.

Kansas center Udoka Azubuike is no stranger to Bamba’s length. They went against each other on the high school recruiting circuit. Azubuike, a true old-school big man, is averaging 15.5 points and eight rebounds.

Bamba is coming off his best performance of the season. He had a season-high 17 points, 11 rebounds a six blocks against Alabama on Dec. 22. Bamba has swatted away 15 shots in the last three games combined.

Bamba is ahead of where Allen was at this point last season. Allen, another one-and-done player, didn’t really find his footing until January. He went off against the Jayhawks, because Allen wanted to impress Self and the Kansas fan base.

At the moment, Bamba’s strengths come from staying in the paint and playing off Osetkowski. With a 7-9 wingspan, Bamba can either block shots or make shooters think twice before letting it rip.

“It’s like we always say, to whom much is given, much is expected.”

Much was expected from one of the nation’s top recruits. Bamba, like all freshmen, is learning as he goes. But Big 12 play has arrived, and if Bamba truly is a one-and-done player with top-three, lottery pick-level talent, now’s the time to show it.

“It’s a learning process,” Bamba said. “I’m just learning how to battle through fatigue and play my hardest all moments of the game when I’m in. But my best basketball is definitely in the future. Hopefully that kick-started that with Alabama and can keep it going against Kansas.”

Minus Malik, Texas linebackers were led by Gary Johnson and Anthony Wheeler in bowl romp