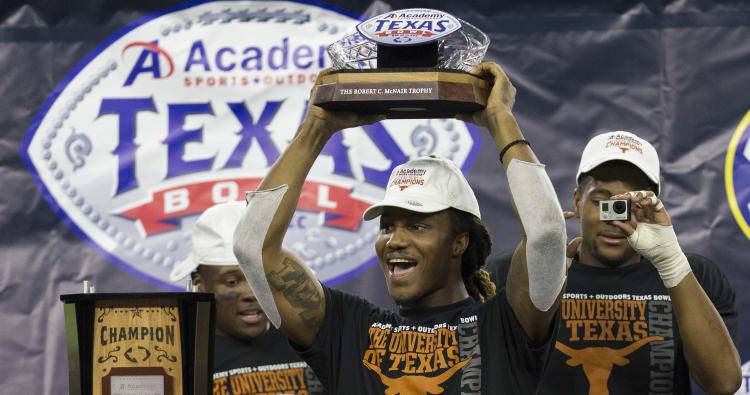 HOUSTON — There were 139 snaps taken in Texas’ 33-16 win over Missouri in the Texas Bowl on Wednesday.  Here are five that ended up making a big difference:

Shane Buechele was given his seventh start of the season, and he quickly directed UT on a scoring drive. After Missouri won the coin toss and deferred, the Longhorns covered 75 yards in five plays. Texas was aided by three Missouri penalties, but Buechele closed out the possession with a 22-yard strike to freshman Daniel Young.

On the play, Buechele faked a handoff to Young. The Houston native then snuck undetected into the Missouri secondary for a wide-open touchdown.

The touchdown gave UT a lead it would not relinquish. Texas earned seven points on its first offensive possession in four games this season, and Buechele was on the field for those scores against Iowa State, Kansas and Missouri.

Texas stalled on its second possession, and punter Michael Dickson was sent onto the field with UT facing a fourth down at the Missouri 36. Dickson got off a 33-yard punt that freshman Josh Thompson downed at the Missouri 3.

With assists from Thompson and Brandon Jones, Dickson landed six of his 11 punts inside the Missouri 10. (Two additional Tigers drives started at their 10). All but one of Dickson’s punts ended up inside the Missouri 20. Dickson’s average of 41.1 yards was more than seven yards off his season-long numbers, but eight of his kicks were launched either near midfield or inside of Missouri territory.

Dickson was named MVP of the game. The only downside to the NFL draft-bound Ray Guy Award winner’s evening was that his season-long average slipped to 47.4 yards. That left him short of Austin Rehkow’s NCAA record for punters with a minimum of 75 punts (47.8 yards), set in 2013.

Led by the rotation of Buechele and Sam Ehlinger, Texas jumped out to a 14-0 lead in the first quarter. Missouri cut that lead in half on Ish Witter’s second-quarter run, but the Missouri senior fumbled on the Tigers’ next drive. Texas linebacker Anthony Wheeler scooped up the loose ball and scored on a 38-yard return.

The fumble was forced by P.J. Locke III, who had missed Texas’ last four games with an ankle injury.

The defensive touchdown was the first of Wheeler’s career, but the sixth of Texas’ season. UT also scored this year on a blocked field goal and a 91-yard punt return. Texas fell shy of the school-record 11 non-offensive touchdowns it scored in 2009, but the Longhorns had no such scores last year.

4. Saved by a safety

Down 21-7 at halftime, Missouri scored on the first play of the second half. UT’s lead was then cut to 21-16 by a 28-yard field goal with 2:44 left in the third quarter. The Texas offense, meanwhile, only generated 45 yards in the quarter.

Toward the end of the quarter, Dickson punted 58 yards to the Missouri 10. Tigers quarterback Drew Lock threw incomplete on first down, and he was then unable to handle a high snap by center Trystan Castillo. The loose ball rolled out of the end zone and resulted in a safety.

The safety bumped UT’s lead to seven points. Missouri never got any closer.

While killing the clock, Texas called a reverse for Foreman. The senior receiver playing in his final game took a pitch from Kyle Porter and with Ehlinger serving as a lead blocker, he scored on an 18-yard run with 1:39 left.

The touchdown was the fifth of Foreman’s topsy-turvy season. UT’s leading receiver in 2016 recorded 31 receptions and a team-high four touchdown catches this year.