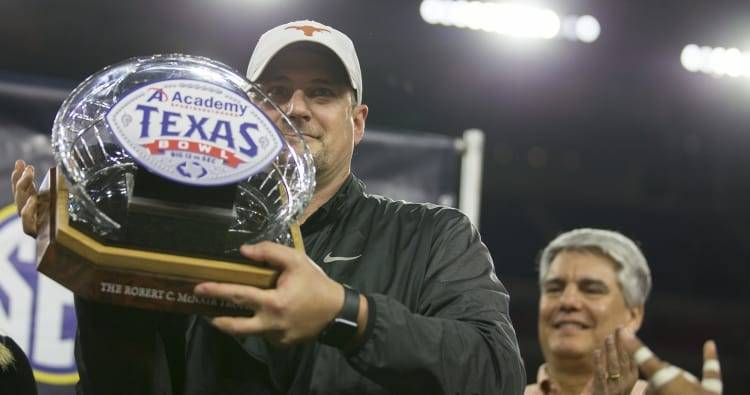 By beating Missouri 33-16 in the Texas Bowl on Wednesday night, Texas secured its first winning season since 2013.

Afterward, Longhorns coach Tom Herman spoke about the win and put it in perspective with the rest of his first season on the 40 Acres. Here is some of what he said during his postgame press conference.

On importance of 1st winning record in 4 seasons:

“You can’t overstate it. It’s really important for these guys to call themselves a winner.”

“Anytime you can give confidence to a fragile group of guys, that’s big. To know that we came in here and beat an SEC team that had won six straight games … they should be proud and they should be confident heading into this offseason.”

On affect of Texas fans at NRG Stadium:

“I credit that safety to our fans. I want to thank them for showing up en masse and making this feel like a home game.”

“I couldn’t be prouder of this senior class. They were the glue that held this up and down season together.”

“Shane went out at halftime with a pretty good groin strain. We were going to play him in the second half, he said he felt pretty good, but Sam was playing pretty good.”

On play of Buechele and QB Sam Ehlinger:

“They both played pretty well tonight. I was excited. That will be a good battle heading into the offseason. Neither of them has played so badly that you can’t fathom them as the starter, but neither has played well enough that you’re ready to anoint them the starter.”

“I’ve never seen (a punter) affect the game the way he did tonight.”

“The thinking was we wanted to score another touchdown. We wanted to call a reverse, and make sure that if we called a reverse it was him. He’s a senior and he’s earned it.”