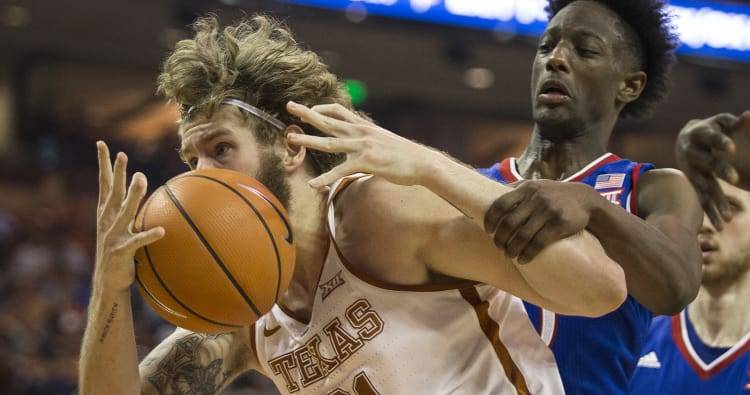 The 13-time Big 12 champions have a seven-man rotation and are awaiting reinforcements. But it’s still Kansas, one of the best shooting teams around.

The 11th-ranked Jayhawks shot the lights out of the Erwin Center on Friday and rolled to a 92-86 victory over Texas before a near-capacity crowd. UT freshman Mo Bamba almost posted a triple-double but it still wasn’t enough in the Big 12 opener for both teams.

The best shooting 3-point team in the Big 12 finished the night 17 for 35 from 3-point range. Devonte’ Graham hit six of those en route to 23 points. Lagerald Vick had 21 more as he also went 5 for 8 beyond the arc.

The Longhorns (9-4, 0-1 Big 12) got within five when Eric Davis Jr. hit two free throws with 6:14 remaining. But then Svi Mykhailiuk lost Dylan Osetkowski in traffic and swished a fadeaway 3-pointer. Every time UT got some momentum, Kansas (11-2, 1-0) answered from downtown.

The Horns stayed close down the stretch thanks to their free-throw shooting. Matt Coleman scored on a put-back that made it a four-point game with 22.7 seconds left. But Kansas answered with two free throws of its own, and then Coleman air-balled a 3-pointer.

Bamba finished with 22 points, 14 rebounds and had eight blocks, coming oh-so-close to just the second triple-double in Texas history. Reggie Freeman still holds that distinction with his 22 points, 10 rebounds and 10 assists against TCU on Feb. 11, 1996. Four other Longhorns finished in double figures, but they spent too much time trading 3-pointers for 2-pointers. Texas was 7 for 25 from beyond the arc.

Hard to find anything wrong with Bamba’s performance. He piled up 16 points, one shy of tying his season high, along with eight rebounds and five blocks. One landed in Pflugerville, another was shot out to Bee Cave. But he also played smart defense against Kansas big man Udoka Azubuike, never going for ball fakes and letting him score after being sealed off. Azubuike had 13 points and 13 rebounds, mostly by going straight at Bamba and letting the shots fall where they may.

As good as Bamba was, there was a noticeable drop in just about everything when he went to the bench for rest On one first-half possession, the Jayhawks got four shots off, piling up one offensive rebound after another. Upon the next stoppage, coach Shaka Smart ran onto the floor and got in Dylan Osetkowski’s face for the lackluster rebounding effort. Osetkowski disappeared for long stretches, although he still finished with 15 points and seven rebounds.

At least official John Higgins was on the case to keep Smart in his coaching box while the ball was in play. Higgins literally stopped the game at one point to make sure Smart was back behind the line. He later called Smart for a technical foul.

Kansas’ speciality was its 3-point shooting. Texas’ speciality was its 3-point defense. The Jayhawks won that battle. Devonte’ Graham, who drilled a half-court shot to end pre-game warmups, was 4 for 8 from beyond the arc in the first half. He kept firing the rest of the way. Svi Mykhailiuk’s back-to-back 3-pointers helped give the Jayhawks a 51-41 lead, a cushion that carried them for most of the second half.

The Longhorns are headed to Ames, Iowa, where the temperature on Monday is projected to be minus-1 degree. Who knows how hot things will get inside Hilton Coliseum against the Iowa State Cyclones, a team that finished non-conference play with a 9-2 record and a nine-game winning streak. Coach Steve Prohm has four players scoring in double figures, but fortunately for UT, none of them are named Georges Niang.

The post At the buzzer: Kansas 92, Texas 86 appeared first on Hook ‘Em.

Future Longhorns set to represent at Under Armour All-America Game