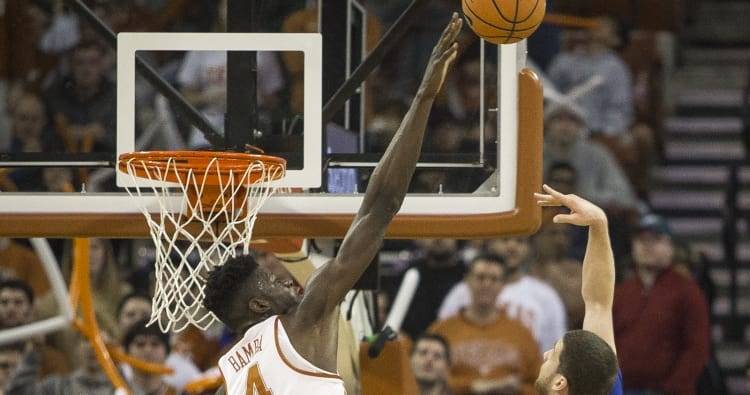 “I think it was,” the Jayhawks veteran guard said.

The Texas players couldn’t believe it, either.

Said fellow freshman Mo Bamba, “It’s probably one of the best 3-point exhibitions I’ve ever seen in my life.”

Welcome to Big 12 basketball, gentlemen. Anything can happen, and it usually does. Bamba played like a superstar on Friday and fell two blocks shy of a triple-double. But it still wasn’t enough as the Jayhawks played like the 13-time league champs they are en route to a 92-86 victory in the league opener.

Kansas’ 17 3-pointers was a new school record against Big 12 opponents. The fact they did it against the league’s best perimeter defensive team was all the more impressive. The Longhorns (9-4, 0-1 Big 12) were merely 7 for 25 from beyond the arc.

A near-capacity crowd was standing throughout the second half, just waiting, hoping, begging for a reason to explode. Any time UT got some momentum going, Kansas (11-2, 1-0) usually had an answer — from way downtown, too.

Graham hit six 3-pointers en route to a game-high 23 points. Lagerald Vick and Svi Mykhailiuk both hit five more. All of those shots were more than enough to negate a star turn from Bamba, who posted a season-high 22 points, 15 rebounds and a freshman-record eight blocks.

The one statement made abundantly clear is that Bamba can’t do it alone. Dylan Osetkowski finished with 17 points, but even Kansas coach Bill Self said the junior had a “bad first half but great second half.”

Jacob Young missed a wide-open breakaway dunk early. One of UT’s starters finished 0 for 4 in 14 minutes. Eric Davis Jr. was 0 for 8 shooting from 3-point range before hitting two desperation treys late. Half of Davis’ 12 points came at the free-throw line.

Andrew Jones, playing in his first game after missing four with a fractured wrist injury, got winded and couldn’t keep up. He had just five points in nine minutes. Coleman had 17 points, but he had to shoot it, considering the Jayhawks left him so wide open at times.

Smart was so worked up, he got warned by official John Higgins for being out of the coaching box. Then, he later got a technical. Asked what for, Smart said, “Just that I deserved it.”

Smart let his players have it, too. With Bamba resting in the first half, the Jayhawks got four shots on one possession. It ended with Vick getting a layup, giving Kansas an 18-17 lead. On the next stoppage, Smart came running onto the floor and got in Osetkowski’s face.

“Gotta grab the ball! That’s absolutely unacceptable,” Smart said. “If you watch the tape, we had a few guys that were waiting for someone else to grab it.”

Standing around and waiting for someone else to do something is a sure-fire formula for failure in this league. That’s something Smart has been trying to instill in his players from the first practice. Stop waiting on someone else; go make a play.

“I was trying to plead with them and get them to understand that if we can get a few stops in a row, it changes everything,” Smart said.

Bamba certainly did. He started like gangbusters, piling up 16 points, one shy of his season high, in the first half. Kansas big man Udoka Azubuike continuously posted up on the low block and wanted to bang into Bamba’s chest on post moves. Sometimes, it worked, like when Azubuike sealed of Bamba and scored on an easy dunk. Other times, Bamba sent basketballs flying across town.

“Man, he blocked everything it seemed like,” Graham said. “We definitely weren’t getting any layups when he was down there.”

Self said Bamba “could have blocked the sun.” Told that, Bamba said, “I’m glad he felt that way, that my presence was definitely felt out there. I guess it was a good effort, but it really wasn’t enough.”

Not against a team that was white-hot from beyond the arc, a place where the Longhorns had been playing superb defense. Sometimes, Texas’ guards didn’t close fast enough. Other times, the Jayhawks simply drilled it. Granted, it was just one game in an 18-game marathon, but the next one comes Monday at Iowa State. They come fast and furious, as Bamba and Coleman will learn.

If the Longhorns can’t give the big man more help, it’ll be a long, cold two months.

“Mo did an excellent job protecting the rim and the paint,” Roach said. “He did a very good job. All the guards just have to do a better job just closing out on the defensive end and we’ll be good.”

Defense should be fine, but Texas has all sorts of offensive questions heading into 2018