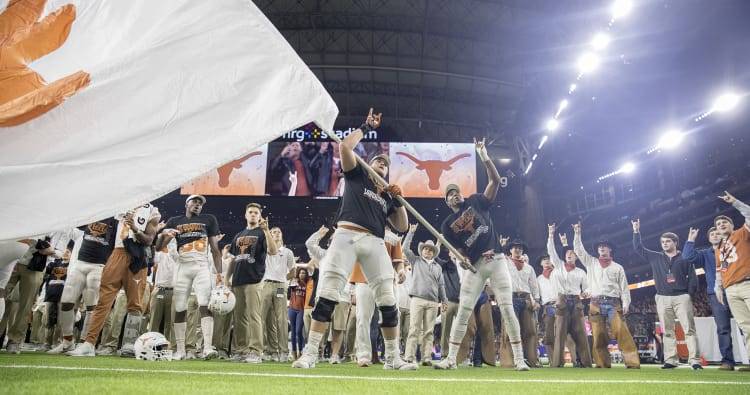 A long-haired wild man incapable or unwilling to shift into robot coach-speak with reporters, the junior linebacker believes he can lift the Longhorns back to national prominence on sheer willpower alone.

After Texas finished 7-6 with a win over Missouri in the Texas Bowl, what’s his prediction for 2018?

“What we’ve got next year is me, Davante (Davis), some other guys that balled out like Malcolm Roach and Charles (Omenihu),” Hager said. “We’re going against the No. 1 offense in the SEC. The SEC is all hyped up and whatever. We held them to 16 points.

There’s a universal belief that defensive coordinator Todd Orlando’s unit will be just fine despite losing some bold-faced names, including Malik Jefferson, DeShon Elliott, Holton Hill and Poona Ford. The biggest questions facing the Longhorns all come on offense. That’s the unit that kept Texas from having a true breakout season in 2017.

“We’re obviously going to judge and be very, very critical of ourselves on that side of the football moving forward in this offseason and figure out a way to get better,” head coach Tom Herman said. “But it’s difficult to judge. Where would we have been with (injured starters) Andrew Beck, Elijah Rodriguez and Connor Williams all season? I don’t know.

“Do we need to do better as coaches coaching up those true freshmen that are in there? Certainly we do,” the coach added. “But there’s not many teams out there lighting the world on fire offensively with true freshmen right tackles, tight ends, tailbacks and quarterbacks. You don’t see that very often.”

There’s no question that Texas was hampered all season without Rodriguez and Beck, the right tackle and tight end who both suffered preseason injuries. Williams, the starting left tackle, played in only five games because of a knee injury.

Herman and offensive coordinator Tim Beck also had to rotate quarterbacks Shane Buechele and Sam Ehlinger all season because of injuries and other factors. For now, neither player deserves to be considered the starter going forward.

Cameron Rising and Casey Thompson, two highly touted quarterback recruits, are set to enroll at midterm and will go through spring drills. Come April, it’s a four-man, wide-open race for the starting spot against Maryland.

Shane, Sam or someone new?

Buechele, who’ll be a junior next season, will be the experienced veteran. Rumors have swirled for weeks that he would transfer. One source familiar with the quarterback’s thinking said Buechele was intent on staying.

However, UT officials never made Buechele available to reporters in December whereby he could set the record straight himself.

Buechele suffered shoulder and ankle injuries this season, and Herman said the quarterback took a pain shot for a groin injury at halftime against Missouri.

Ehlinger played the entire second half and finished the game with 112 yards and one touchdown. Unfortunately, that’s not enough to negate the fact Ehlinger was directly responsible for three losses — a goal-line fumble against USC, a game-ending interception against Oklahoma State and a killer interception against Texas Tech.

“I’m just going to keep chipping away, keep doing what the coaches ask me to do,” Ehlinger said. “I think it was great to get the experience I did my freshman year, because a lot of guys in their freshman year don’t get that opportunity. So I’m really excited for that experience, and I think it’s going to help a lot moving forward.”

Those three critical moments all could be pinned on the offensive staff and really on Beck, the play-caller.

Why the Horns ran quarterback “power” with a freshman against the Trojans on the goal line will forever remain a mystery. The ball was stripped away in a second-down pileup.

Why did they have Ehlinger roll to his left and throw across his body in overtime near the goal line against the Cowboys? Herman said the play design was exactly what Clemson had used to beat Alabama in the 2016 national championship game. Well, it sure wasn’t Clemson-level execution. Ehlinger threw it up for grabs for an easy interception.

And the decision to have Ehlinger throw on third-and-2 late against Tech is probably the single biggest play-calling mistake of the year. Inside Tech’s 40-yard line and leading 23-20 with just over two minutes left, Texas needed only 2 yards essentially for the win. But Ehlinger rolled out and again threw across his body into traffic. The Red Raiders had an easy interception that set up their game-winning score.

Two yards on two plays and Texas had the nation’s best punter? That’s not a passing situation. Even Herman’s multi-colored “binder” would say run it and go for it. The binder was wrong a lot, though; UT finished 14 of 30 on fourth-down conversions.

Those crying on social media for a change will probably be disappointed. Herman was emphatic that his current staff would return in 2018 totally intact. The school has given each assistant guaranteed multi-year contracts.

Who’s the running back?

Beck totally abandoned the run at times. Herman said the team lacked a “game-changer.” It sure wasn’t Kyle Porter or Chris Warren III, who was moved to tight end and ultimately transferred out. Toneil Carter showed some potential, but he got suspended for the Texas Bowl for a violation of team rules.

Daniel Young won the starting nod and made the most of his opportunity. Starting only five games, he became the team’s second-leading rusher (373 yards) behind Ehlinger.

“We’re going to get better by doing what we’ve been doing — by trusting the coaches, trusting in everything they’re telling us,” Young said. “It’s going to be there.”

Texas has a commitment from Carthage’s Keaontay Ingram, projected as the state’s best running back prospect. But Ingram did not sign a national letter of intent during the early signing period. The Horns are acting like it’s nothing to worry about, but now every other team has a chance go persuade Ingram to look elsewhere. The next signing window comes in February.

Nobody expected Williams to return in 2018; he was always going to jump into the NFL draft early. But nobody expected freshman Derek Kerstetter to get pressed into action so early because of Rodriguez’s ankle injury. Rodriguez’s backup, Denzel Okafor, simply could not handle the position.

Rodriguez, who will be a senior next season, played left tackle against Missouri with Williams out. “Coming back from a long injury, I feel pretty sore, honestly,” Rodriguez said afterward. “At the end of the day, when you get that win, it doesn’t matter.”

Receivers under exam, too

Texas’ receiving corps was thought to be the strongest, deepest part of the entire team. But nobody established themselves. Some of that was due to a mind-boggling personnel rotation that seemed rooted in giving out participation ribbons than keeping the best players on the field.

Armanti Foreman’s senior season is proof positive this receiving corps did not excel. Herman benched Foreman throughout October for reasons that were never quite clear; it happened about the same time Foreman’s father was criticizing Herman on social media, but Herman always said it came back to who practiced the best.

The 2014 offense was second-worst unit in the Big 12, and John Harris still became a 1,000-yard receiver that year. Herman’s receivers coach, Drew Mehringer, has escaped all scrutiny.

What about tight end?

The Horns went into the Texas Bowl with only one scholarship tight end — fifth-year senior Kendall Moore. And Herman said he suffered a second-degree medial collateral ligament knee sprain during the game.

The Horns will activate freshman Reese Leitao, who redshirted this year. “He runs well. He catches the ball well. I was really surprised,” Beck said of Leitao.

It’s also hoped the Horns will have freshman Cade Brewer back healthy. The Lake Travis product played in 10 games and caught two touchdowns. But he suffered a knee injury against Kansas.

“Obviously, we were really close this year,” Ehlinger said. “We had a bunch of games that could have gone either way. I think like coach Herman said, we’re on our way, but we’re not there yet.”

At least the Horns can go into the offseason feeling good. Texas posted its first winning season since 2013. “And that hasn’t happened in a while. It’s definitely a step,” Ehlinger said.

The post Defense should be fine, but Texas has all sorts of offensive questions heading into 2018 appeared first on Hook ‘Em.

Could Texas hire Mark Helfrich as the new 10th assistant in January?