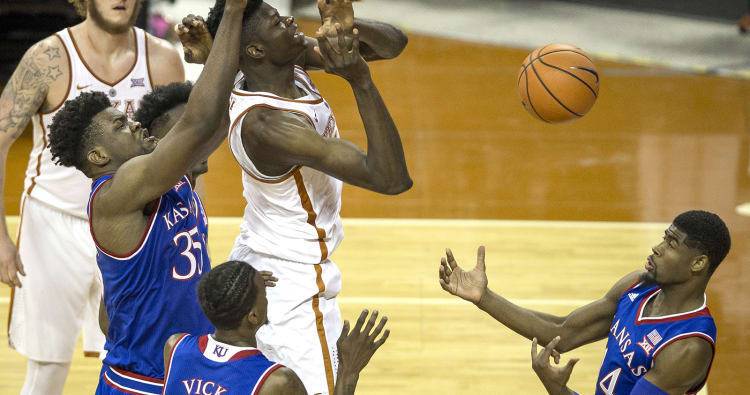 The Big 12’s opening weekend was bonkers on the basketball court.

The Longhorns (9-4, 0-1 Big 12) will start 2018 in memorable, frigid fashion — spending New Year’s Day in Ames, Iowa, battling the Cyclones. The projected temperature outside Hilton Coliseum around the 6 p.m. tipoff is minus 14 degrees.

“We’ll be inside, for one thing,” Texas coach Shaka Smart said of his team’s New Year’s Eve plans. “Then come together and find a way to win the next day. I think that’s really the simple answer.

“You go up there, that’s a hard place to play,” the coach added. “Our program I don’t think has won there since 2010. But we have to focus on ourselves and the things that go into winning. That’s what we should be doing the night before.”

Iowa State fans are routinely the rowdiest bunch in the Big 12. Some of their language doesn’t exactly reflect Midwestern values, either. Perhaps they’ll be subdued coming off a rollicking football performance against Memphis in the Liberty Bowl.

The Big 12 opener must’ve been a sobering experience for Bamba and fellow freshman Matt Coleman. Bamba had a season-high 22 points, 15 rebounds and a UT freshman-record eight blocks. Coleman had 17 points, two shy of his season high, and five assists.

And yet they watched the Jayhawks swish a dizzying array of 3-point shots en route to a 92-86 win. Kansas’ 17 3-pointers were the most ever for coach Bill Self’s club in a Big 12 game.

“They tested us,” Coleman said. “They got a few open looks and knocked down a couple with hands in their face. They had it going. I give them a lot of credit, a lot of respect.”

Shooting guard Andrew Jones returned from a fractured wrist, but he was limited. Jones played just nine minutes and looked winded, which seemed odd because his wrist was injured, not his legs. He was averaging 15.3 points before missing four games.

The Cyclones (9-3, 0-1) are rebuilding to some degree this year, and the group has been up and down. Iowa State shot a season-high 68 percent from the floor in the first half against Kansas State but a season-low 23.1 percent in the second half. The Wildcats won 91-75.

“We got hit in the mouth,” Iowa State coach Steve Prohm said. “It happened a month or two ago — we responded — and I expect them to respond (this time) and be ready to go for Monday.”

Prohm’s club is looking to avoid an 0-2 league start at home, something that hasn’t happened since the 2009-10 season.

It might sound hyperbolic, but this is a critical game when looking at the bigger picture. First, it’s a road game; UT was 0-9 in Big 12 road games last season. Texas will play at No. 18 Baylor on Saturday and then host No. 10 TCU on Jan. 10.

If the Horns stumble too much early, they’ll be buried before the league race hits the quarter pole.

“It’s all about us controlling what we can control,” Smart said.

The weather isn’t one of those things, but defense and rebounding sure are.