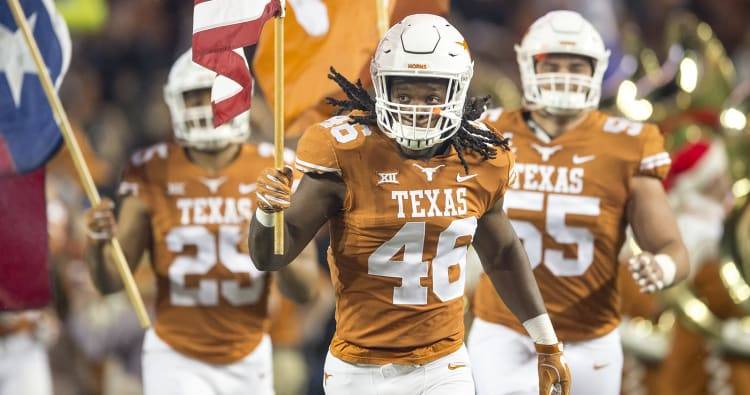 Texas linebacker Malik Jefferson, once the state’s No. 1-ranked recruit who became the face of the Longhorns program under former coach Charlie Strong, is going pro.

The junior from Mesquite Poteet made his announcement Sunday via a video post on The Player’s Tribune. He becomes the fourth player from the 2017 team to declare early and jump into the NFL draft.

Jefferson’s announcement caps a wild three-year ride that saw him begin as a freshman All-American. He had 61 tackles in 2015 as the leader of what many thought would be coach Strong’s breakthrough recruiting class.

But Jefferson struggled under the weight of rising expectations as a sophomore. He was the 2016 Big 12 preseason defensive player of the year but had only 62 tackles in 11 games and eventually got benched, mostly to send a message. Jefferson faced numerous questions as to whether he was playing out of position or whether he truly was a team leader.

How Jefferson handled things was closely watched by teammates. “Malik is somebody I look up to a lot,” defensive end Malcolm Roach said last season. “Coming off the bench, he showed a lot of humility because he did not fight it. He did not complain or anything. He just said I’m going to play my role.”

RELATED: ‘Welcome back’: How Malik Jefferson’s mother helped him snap out of his funk

Things changed dramatically for Jefferson under first-year coach Tom Herman and defensive coordinator Todd Orlando. They moved him to a hybrid linebacker position, one that allowed him to move all over the field. Jefferson responded with his best season yet, totaling a team-high 110 tackles, four sacks and six quarterback pressures. He was the Big 12’s co-defensive player of the year and a first-team all-conference selection.

“It’s been fun to watch these last couple weeks, huh?” Herman said in late September. “He’s not doing anything other than sticking his foot in the ground and going. And when he does that, he’s really good, and he should continue to do that and even better.”

RELATED: Texas LB Malik Jefferson: ‘Sometimes you’ve got to look in the mirror to find your mistakes’

He played in all 12 regular-season games despite being slowed by a nagging turf toe injury in November. Jefferson flew to Wisconsin to see a toe specialist in hopes of getting healthy for the Texas Bowl against Missouri. He worked overtime to get healthy, even going through pre-game warmups to test his foot. Ultimately, Jefferson did not play.

The coaching staff held out all hope for Jefferson. They planned on having him wear jersey No. 60 against Missouri as a tribute to the late Tommy Nobis. When it looked like Jefferson wouldn’t play, the honor fell to Breckyn Hager, whose father Britt wore No. 60 during his All-American career with the Longhorns.

Despite his ups and downs on the field, Jefferson was a superstar off it — someone who relished representing the Longhorns away from Royal-Memorial Stadium. With trademark dreadlocks and a mega-watt smile, Jefferson was far and away the team’s most well-known player.

He’s one of the few players that reached single-name status: Malik.