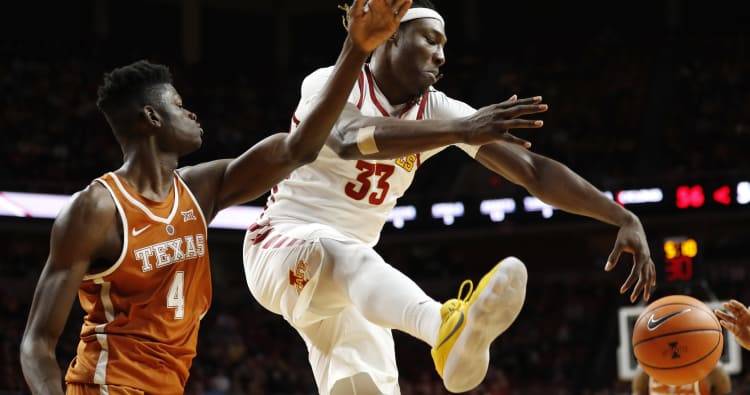 AMES, Iowa — Texas was going to shoot its way into the new year whether it was advisable or not.

The Longhorns took a whopping 32 3-pointers on Monday no matter the consequences. Dylan Osetkowski took a slew of them and drilled seven as Texas captured a critical 74-70 overtime win over Iowa State.

Matt Coleman had two driving layups and hit two big free throws with 8.1 seconds left. It was all part of an all-around great performance that put him close to a triple-double. Coleman had 12 points, nine assists and seven rebounds.

The Longhorns (10-4, 1-1 Big 12) have not had much success at Hilton Coliseum. The Cyclones came into the game with an 11-4 all-time home record against the Horns. Texas had not won here since January 2010.

Iowa State’s Donovan Jackson hit a 3-pointer from the top of the key to give the home team a 61-59 lead. But Texas guard Matt Coleman came down and hit a runner in the lane, tying things up.

On the next possession, Eric Davis Jr. came out of nowhere to force a turnover and get fouled. But he missed a free throw with 17.8 seconds left, and Iowa State had one more chance. But two half-baked shot attempts wouldn’t go down and the Horns breathed a sigh of relief going into overtime.

In overtime, Mo Bamba had a key block of Iowa State freshman Cameron Lard’s shot, and the Horns went the other way. Matt Coleman blew threw the defense and scored on a reverse layup, giving Texas a four-point lead with 1:41 remaining.

Coach Shaka Smart was frustrated with Davis contributions, or lack there of, in the final non-conference games. But Davis scored 12 against Kansas and put up even more against the Cyclones. He kept the Horns in it during key moments on the second half, scoring three tough baskets and drawing two fouls in the process. He also buried a critical 3-pointer with 2:02 remaining that gave the Longhorns a 59-58 lead.

There were a lot of in-game teachable moments against the Jayhawks. This game featured a few opportunities for the film room later this week, too. When teams turn the ball over on the press, the Horns must make them pay.

For example, the Cyclones coughed up an inbound pass right under the basket, but Osetkowski missed a two-handed dunk. Matt Coleman followed with a missed 3-pointer. Later in the half, Jeff Beverly threw a bad inbound pass straight to Andrew Jones, who buried a Texas 3-pointer.

Another critical area: keeping your composure. Kerwin Roach Jr. buried a 3-pointer with about 30 seconds before halftime and then immediately got a technical foul. Why? Replay didn’t appear to show anything, other than him staring at someone. The bench did not get an explanation.

The worst 3-point shooting team in the Big 12 tried to live on the perimeter against the Cyclones. And it worked — until it didn’t. Osetkowski was hot beyond the arc in the first half as the Longhorns were 7 for 16. But they eventually reverted back to the mean. Texas started 1 for 5 from long range after the break. At that same point in the game, Iowa State was 3 for 17 total and led by five.

Texas has not started its spring semester yet, so players have the rest of the week to relax and focus on basketball. UT’s next game is Saturday at Baylor, a team that dropped out of this week’s AP Top 25 poll but would still be 26th if it extended that far. Coach Scott Drew’s club got rocked in Lubbock on Friday, losing to Texas Tech 77-53 in its Big 12 opener. Baylor hosts TCU on Tuesday.