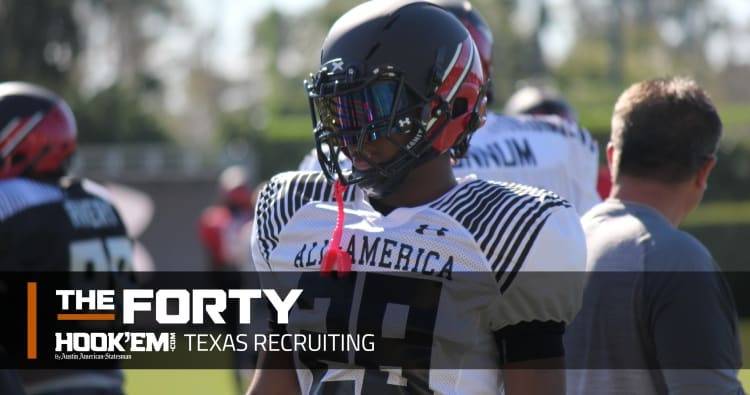 ORLANDO — Texas bagged 19 signatures when the dust settled after the three-day early national signing period from Dec. 20 to Dec. 20. Only two commitments – running back Keaontay Ingram and defensive tackle Keondre Coburn – chose to not sign early yet remain committed to the Longhorns.

The new early signing period was unchartered territory. Coaches were surprised by the number of prospects who wanted to sign early, causing scheduling issues with bowl preparation and recruiting attention.

There were also scheduling conflicts for the players. Ingram and his Carthage High School teammates won a state title the week of the early signing period. Coburn, while talking to reporters at the check-in of the Under Armour All-America Game, indicated that his mom couldn’t make it in town for a signing day in December.

“I think the early signing period is for the early enrolling. If you sign early or in February doesn’t matter for the rest of us because we’re going there at the same time,” said Coburn, Texas’ lone defensive line commit. “It really just lets coaches see who is locked in and focus on other guys.”

Defensive line remains the biggest need in the 2018 recruiting class. Keeping Coburn, a 4-star defensive tackle, committed is a big part of the puzzle. The Longhorns expect to sign more than the 25-man limit because multiple signees in the 2018 class are signing early, meaning those scholarships can be counted backwards towards the 2017 scholarship limit.

“It wasn’t a difficult decision because I was sticking with my choice,” Coburn said of letting the early signing period pass. “I decided to wait because we’re all going there at the same time. There was no rush. I wanted to sign in February.”

Coburn said he “most likely” will sign with the Longhorns on Feb. 7, the next chance for prospects in the 2018 class to sign a national letter of intent. He also indicated that he’ll visit UCLA and TCU, among others. He can take four more official visits before signing and he plans on beginning those visits after the Under Armour All-America Game on Jan. 4 in Orlando.

Texas will continue to recruit Coburn and the 4-star understands why Texas fans, and even the coaching staff, felt about him choosing to continue the recruiting process instead of joining the bulk of his fellow commits.

“I respect the way Texas felt because I would’ve felt the same way if I was a coach,” he said. “You committed to us so why can’t you sign with us? But I’m looking at it like I’m committed to Texas and that’s my way of saying I’m mostly likely going to sign there. This is a big decision and I wanted more time.”

It’s less complicated with Ingram. The 4-star running back left no doubt about his intentions come Feb. 7.

“There is nothing to worry about for the Texas fans,” Ingram said Friday in Orlando. “I’m going to sign with Texas in February.”

Ingram helped his Carthage program to a second straight Class 4A Division I state championship and topped 5,000 yards of rushing in his career. He could easily be the future at the running back position, which is now without Chris Warren and relied on freshman Danny Young down the stretch.