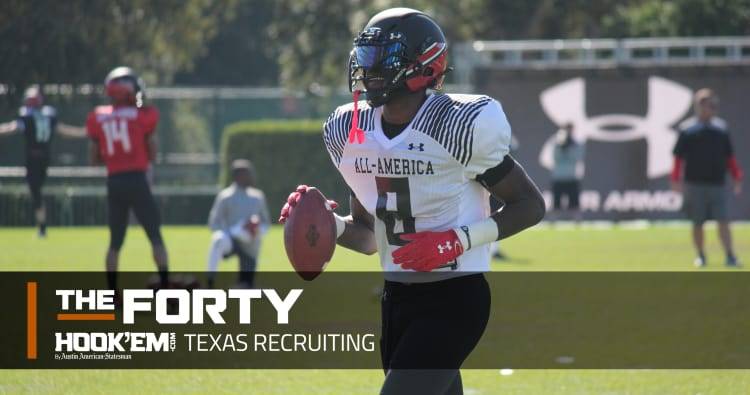 Future Longhorns excited about the future

Confidence isn’t running low in the 2018 recruiting class. Texas signed 19 of its 21 current commits during the early signing period. The class ranks third in the nation and first in the Big 12. The mission is simple: Restore the Texas football program back to the glory days these teenagers grew up watching.

“Texas is fixing to come back and serve something up in the Big 12,” said 4-star tight end Malcolm Epps, who signed on Dec. 20. “We’ll probably be in the college football playoff by my second or third year and win a title by my fourth year. We want to be the old Texas. We’re excited about our recruiting class.”

The Longhorns aren’t done recruiting. Texas hopes to keep the commitments of Carthage runnign back Keaontay Ingram and Spring Westfield defensive tackle Keondre Coburn, the lone commits who didn’t sign early, while adding a handful of other recruits before Feb. 7, the next national signing day. Some of those recruits are at the Under Armour All-America Game with Texas signees.

“It is great to be out here and have the recruiting process over,” said 4-star wide receiver Al’vonte Woodard. “Now, it is up to us to help recruit some guys to Texas while we’re here like Joshua Moore, Jalen Preston and offensive lineman Nicholas Petit-Frere because we need more offensive linemen for us to be successful.”

The saga of outside linebacker Nik Bonitto of St. Thomas Aquinas in Florida is one of whispers. During check-in of the Under Armour All-America Game week, the 4-star prospect declared he’ll pick a school during the game on Jan. 4. It’s between Oklahoma, Texas and Louisville.

“I was really close to singing (on Dec. 20). I changed my mind the night before. I didn’t change my mind on where I wanted to go, but I wanted some more time to think about my decision,” he said Saturday afternoon in Orlando. “My final schools were putting some pressure on me to sign in December, but I wanted more time.”

“It is good for kids who are enrolling early or know exactly where they want to go,” he said. “It puts pressure on the rest of us to sign before we’re ready.”

Bonitto said each of his top three programs would’ve preferred he signed in December, but that Texas, Oklahoma and Louisville will have a spot open for him on Feb. 7, his next chance to sign with a college. Bonitto is high on Texas, though Oklahoma is surging into the lead.

“Texas is a really good program with a great recruiting class,” Bonitto said. “They’re trying to build it back to how it used to be. They tell me I’d be a big piece to the class.”

The difference between 7-6 and 6-7 was immeasurable for the Texas program. Staring at its fourth consecutive losing season, the Longhorns knocked off Missouri to secure a winning season in Tom Herman’s first year despite multiple players missing the bowl game due to NFL departures and injury.

“The bowl win was good going into next season with momentum,” Woodard said. “It’ll help the guys work harder in the offseason and get those early enrollees in the program on a good note. It’s always great to win the last game of the season.”

It also should help Texas secure a few more commitments before the next signing day.

“That win was big for the program because it shows the growth between now and the first game under coach Herman,” said 4-star safety signee DeMarvion Overshown. “We’ll be working guys this week and reminding them Texas just knocked off an SEC team and is on its way back to the top.”