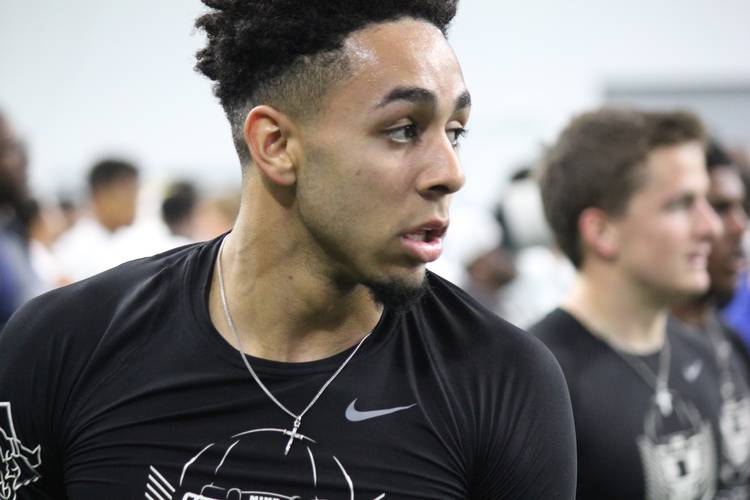 SAN ANTONIO — Texas lost a prized talent at linebacker on Sunday when Malik Jefferson became the fourth Longhorn to declare for the NFL draft. But while Texas is losing an elite defensive player, the decision helped with a key 2018 recruiting target — North Richland Hills linebacker DaShaun White.

White, a 4-star recruit who’s committed to Texas A&M, said he’s aware of Texas’ need for linebackers. Gary Johnson appears to have the middle spot locked down, but the other two starting spots are not settled.

“It was big for me to see whenever Malik Jefferson declared for the draft because now things are sort of wide open,” White said Tuesday during workouts for this week’s U.S. Army All-American Bowl. “Just seeing that those other two spots are wide open, it’s a big deal.”

White tallied 154 tackles, 21 tackles for loss and six sacks as a senior. He committed to the Aggies in August but now has programs like Texas and Oklahoma pursuing him. He said he could have only dreamed of being in this position a year ago.

“I remember watching this (all-star) game last year; I had no offers at the time, so I really had to hit the ground running,” he said. “Now I want to prove that I’m the best linebacker in the nation.”

White called Texas defensive coordinator Todd Orlando “one of the best in the nation.” He said he wants to make his final decision sooner, not later.

“I really don’t want to push it until national signing day (on Feb. 7),” he said. “I really want to get this over with and squash it and be done.”

Cook, Sterns ready to play: Texas netted arguably the most elite haul of defensive backs of the modern recruiting era in December. Safeties BJ Foster and DeMarvion Overshown and cornerback D’shawn Jamison are opening the year in Florida for Thursday’s Under Armour game, and cornerbacks Anthony Cook and Jalen Green and safety Caden Sterns are in San Antonio.

That’s six signees all of whom are All-Americans; with the departures of top cornerback Holton Hill and Thorpe Award finalist DeShon Elliott, Texas has openings in the secondary.

The incoming freshmen feel they’ll be ready to compete.

“Nobody can stop you except for you,” Sterns said. “I’m a firm believer that if you work hard and you do what you need to do, there’s no doubt that us freshmen will be on the field early.”

Sterns and Cook will be early enrollees. Cook said adjusting to the speed of the pass-happy Big 12 will be the biggest adjustment, but that fortunately he has received credible advice from Hill himself — Cook’s former teammate at Houston Lamar.

With a skill set comparable to Hill’s in many ways as an elite coverage corner, locking up likely won’t be the hard part. The pressure that comes with being a headliner of the Longhorns’ 2018 class, however, is a different story.

With Hill headed to the NFL, Cook is a competent candidate to fill those shoes on the outside. But with that opportunity comes the pressure of matching up with some of the nation’s premier pass-catchers.

But after playing in the spotlight at Lamar, which has been dubbed by some as “DB High,” Cook is ready for that moment on the big stage.

“No pressure. It’s nothing to it but working hard and locking up,” Cook said. “I’m ready for it. I’m keeping my head on straight, not getting to cocky, just remaining humble and working hard.”

Longhorns in the NFL: Some rest up while others hit stride in Week 17