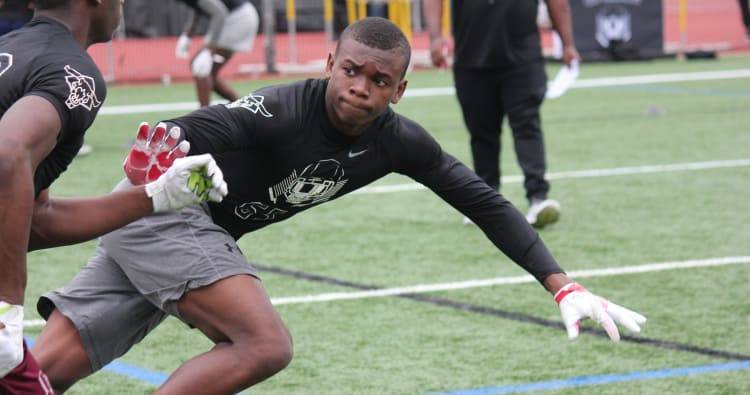 With the U.S. Army All-American Bowl just days away, some of the top talents in the nation are gearing up for the final game of their high school careers.

On Tuesday, The Statesman was on hand for a two-part practice that proved plenty of glimpses at the quality of recruits soon headed for Austin.

Throughout much of the morning and afternoon, Cook reaffirmed exactly why he was such a coveted recruit. During skill position drills, in which two defensive backs were matched against two receivers, the receiver Cook covered simply wasn’t even targets for the first seven or eight reps. The Houston Lamar was exceptional in coverage far more often than not, flashing the technique he prides himself on and physicality at the line of scrimmages that noticeably flustered receivers.

From what I observed, Cook allowed only two catches, with one going to 5-star California product Amon-Ra St. Brown and the other to Eagles, Cook’s future teammate.

“Me and Brennan went at it,” Cook told The Statesman of the several matchups between Eagles and himself. “He got that last one on me; I don’t like that,” Cook said laughingly. “We’ll be doing a lot of that in the future so we’re just doing it now and getting ready.”

Speaking of Eagles, he’s someone Texas fans will see on the field early and often in Austin.

A pure deep threat, Eagles beat defensive backs down the field with relative ease throughout the practices, which also includes another future teammate in Green. Eagles ran crisp routes and found himself open more times than not, and when he did,  he as as sure-handed as could be, hauling in virtually everything that came his way.

Along with Cook and Eagles, Sterns and Green impressed, as well, with each seeing reps at cornerback and safety. Sterns, who told The Statesman he’ll be playing cornerback at Texas, was instinctive in the secondary and made his share of plays, including a diving interception downfield during the early portion of two-on-two drills. Much of the same can be said for Green, who struggled a bit in coverage out of the gates, but found his stride a bit later and came up with a couple pass breakups. And although full-speed tackling wasn’t allowed at various points, Green did put himself in position to make what would have likely been a big play in a live setting.

It’s quite clear Derek Warehime is getting an aggressive and energetic talent along the offensive line in Angilau. On several instances, he was full of enthusiasm while others simply watched. He saw reps on both sides of the ball.

Key Texas targets DaShaun White and Jaylen Waddle were in attendance, as well.

It’s easy to see why each are a priority for the Longhorns down the stretch. Waddle is extremely quick and sharp as a route runner and simply blew by defensive backs for a few touchdowns. White’s ability to cover some of the nation’s top receivers during 7-on-7 drills is why he’s such an ideal fit in Todd Orlando’s defense at linebacker. Along with Herman and Orlando, White told The Statesman that Texas signees were actively in his ear about the Longhorns even though he is a Texas A&M commit.

“I know the Texas guys are coming at everybody hard,” White said.