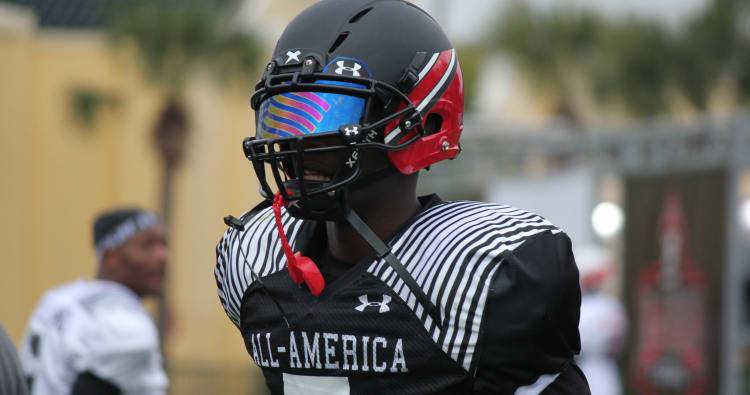 Of the eight, there were standouts through the first three days of practice. The 2018 class is ranked third in the nation and first in the Big 12. It is a defensive back-heavy group, but there are other players raising eyebrows outside of the position group, while one safety is raising his stock.

There is nothing tiny about the small-town kid from Arp. Overshown was known as a hard-hitting safety who could also spin to linebacker because of his long frame. Overshown, who didn’t attend many camps and plays in East Texas, is building on his reputation by showing the ability to stick with the best wide receivers in the country. He might be the best safety in Orlando through three days of practice.

Ingram didn’t sign with Texas during the early signing period. He did indicate at check-ins that there was nothing to worry about for Longhorn fans, declaring he’ll sign with Texas in February. Ingram helped Carthage High School to a second consecutive Class 4A Division I title the same week of the early signing period and didn’t want to distract from his team. The defense is winning most battles in the trenches, making it hard for any offensive player to consistently find success, but Ingram has shown the ability to make plays on his own and catch out of the backfield through three days.

It’s hard to find a prep offensive lineman who can block Coburn 1-on-1. He leaves a path of destruction after most plays and he, along with the rest of the defensive linemen in Orlando, are making it tough for the offense to get much done in practice. Coburn is uniquely agile for man his size and his motor never stops. He uses his low center of gravity to his advantage and can win at the point of attack with power and quickness. Coburn plans to take visits before national signing day.

Adeoye floated under-the-radar for most of his senior season after a move to IMG Academy. Out-of-state commitments rarely get the same publicity as in-state commitments because it’s simply harder to go see them play. Adeoye is living up to the hype during practices, moving exceptionally well for a guy his size. Adeoye isn’t the tallest linebacker, but it hasn’t stopped him from making an impact against the run and in coverage. Adeoye, an early enrollee, will remind some Texas fans of current linebacker Gary Johnson, and he might just start next to him in 2018.

The sheer size of Epps makes him a matchup nightmare for most defenders. He’s too tall for cornerbacks and safeties to make an impact on him as a receiver, and he’s faster than most linebackers. Epps’ catching radius is a quarterback’s dream, and he’ll be an instant weapon in the red zone and on third down. He’s shown a willingness to block this week against the cream of the crop defenders. If he continues to do that once he arrives in Austin, Epps could be poised for a big career.