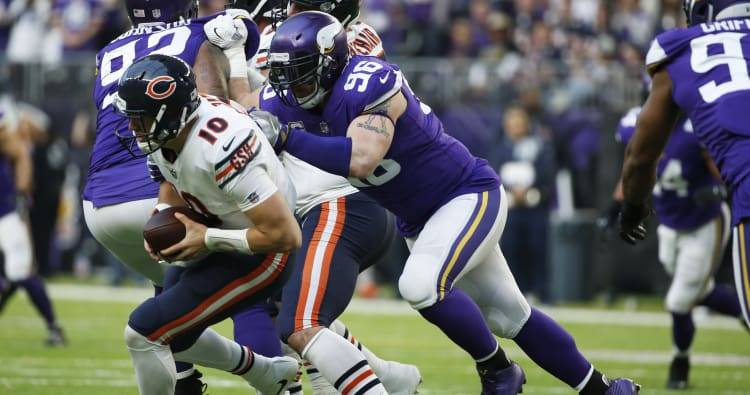 Brian Robison and the Vikings defeated the Bears 23-10 to secure a first-round bye for the playoffs on Sunday. Robison had two tackles and a sack in the game. He and his team have allowed the fewest amount of points in the league this year and have a real shot at being the first team to play a Super Bowl on their home field.

Brian Orakpo made two tackles and recorded a sack as his Titans beat Jacksonville 15-10 to earn a wild-card spot in the playoffs. All the Titans had to do was win to get in and that they did. Orakpo finished the season with seven sacks. It’s his third straight season having recorded at least seven. The Titans travel to Kansas City on Saturday to take on the Chiefs.

Marquise Goodwin was on a roll before suffering a concussion in the season finale against the Rams. With Jimmy Garoppolo starting for San Francisco, Goodwin started to look like a true No. 1 receiver. He had two catches for 28 yards and even had a running play go 10 yards in the 34-13 win. Goodwin finished the season with a career-high 56 catches for 962 yards, 48 yards shy of his first 1,000-yard season. The 49ers offense, led by another former Longhorn Kyle Shanahan, will be one to watch in 2018.

Malcolm Brown, RB, Rams—Brown got the starting nod as the Rams rested Todd Gurley. He rushed 14 times for 54 yards and added four receptions for seven yards in the loss to the 49ers. He’ll be relegated to the backup roll once Los Angeles hosts their playoff game against the Falcons on Saturday night.

Earl Thomas, S, Seahawks—Thomas made six tackles, but his Seahawks fell 26-24 to the Cardinals. The Seahawks failed to make the playoffs for the first time since 2011. Injuries and age had something to do with that. Thomas finished the season with 88 tackles, two interceptions and a touchdown.

Hassan Ridgeway, DT, Colts—Ridgeway returned to action in Week 15, but made his biggest contribution in the season finale. He made three tackles, a season-high, and recorded his third sack of the year in the Colts’ 22-13 win over the Texans. Ridgeway totaled 14 tackles on the year.

Phil Dawson, K, Cardinals—He was 4-for-4 on field goal attempts in the Cardinals’ win over the Seahawks. He also connected on both of his extra-point attempts. He made three field goals beyond 40 yards and added one from 53. Doesn’t sound like someone quite ready to retire, but we’ll have to see what the 42-year-old decides.

Sam Acho, LB, Bears—Acho made two tackles and logged a sack as the Bears fell to the Vikings to close out the season. Acho finished the season with 45 tackles, three sacks and a forced fumble. He was three tackles shy of a career high.

Justin Tucker, K, Ravens—Tucker was perfect on Sunday, but it wasn’t enough as the Ravens fell to the Bengals, ending their hopes for a playoff run. Tucker went 2-for-2 on field goals and made three extra points. He made a long of 46 yards. Tucker made 91.9 percent of his field goal attempts, connecting on 34-of-37. Tucker made every field goal he tried under 40 yards and was 16-of-19 from beyond that range, with a long of 57.

Marcus Johnson, WR, Eagles—Johnson made three catches for 23 yards, but he also lost a fumble in the 6-0 loss to the Cowboys. Johnson got some playing time as the Eagles had nothing to play for having already locked up home-field advantage in the playoffs.

Quandre Diggs, S, Lions—Diggs made three tackles in the 35-11 win over the Packers to end the Lions’ season on a positive note. He closed out the year with a career-high 55 tackles. Diggs also notched career highs in sacks (1), interceptions (3), passes defended (9) and tackles for loss (5).

Malcom Brown, DT, Patriots—Brown and the Patriots had an easy 26-6 win over the Jets to seal up home-field advantage throughout the playoffs. Brown made two tackles and had a half tackle for loss in the win.

Trey Hopkins, OG, Bengals—Hopkins and the Bengals put a dagger in the hearts of Ravens fans everywhere and put the Bills in the playoffs with a 31-27 win. Hopkins helped the Bengals gain 146 yards rushing and protected Andy Dalton long enough to throw a last-minute game-winning touchdown to Tyler Boyd. The win eliminated the Ravens while allowing the Bills to sneak into the postseason.

Lamarr Houston, LB, Bears—Houston made two tackles in the loss to the Vikings. He finished the year with 17 tackles and five sacks in ten games. Houston also scored on a 34-yard fumble return while with the Texans earlier this season. It was his first touchdown in his eight-year career.

Fozzy Whittaker, RB, Panthers—Whittaker had one carry for no gain and caught one pass for nine yards in the 22-10 loss to the Falcons. He might not see much action in the playoffs as Christian McCaffrey is the main target out of the backfield.

Nick Rose, K, Chargers—Rose was 1-for-2 on field goals and 3-for-4 on extra point attempts in the 30-10 win over the Raiders. He was 11-of-14 on field goal attempts this season with two teams. Rose had a long of 55 yards with the Redskins earlier this season.

Colt McCoy, QB, Redskins—McCoy didn’t make an appearance in the 18-10 loss to the Giants. With Kirk Cousins’s status in the air, it will be interesting to see what roll McCoy has next season.

Geoff Swaim, TE, Cowboys—Swaim played in 13 offensive snaps, but he hasn’t recorded a catch since Week 8 against the Redskins. The Cowboys beat the Eagles 6-0 Sunday. Swaim played in a career-high 15 games but caught just two passes for 25 yards.

Derrick Johnson, LB, Chiefs—Johnson got some rest Sunday since the Chiefs were locked into their playoff seed. They beat Denver 27-24.

Jamaal Charles, RB, Broncos—Charles didn’t make an appearance in Sunday’s loss to the Chiefs. The Broncos struggled all season and his presence wasn’t much of a factor in the limited success they saw. He finished the year with 69 rushes for 296 yards and one touchdown. Charles played in 14 contests, a marked increase in action over the previous two seasons. He may test free agency in the offseason.

D’Onta Foreman, RB, Texans—He ruptured his Achilles in Week 11 and is out for the season. Foreman rushed 78 times for 327 yards and two toucdowns in his rookie campaign.

Kenny Vaccaro, S, Saints—Vaccaro wasn’t able to finish the season as he dealt with a groin injury that wouldn’t go away. He was placed on injured reserve on Dec. 21.Vaccaro ended the year with 60 tackles, 1.5 sacks and a career-high 3 interceptions.

Keenan Robinson, LB, Giants—Robinson injured his quad on Nov. 5 and ended up on injured reserved. In just six games of action he recorded 32 tackles and two passes defended.

Alex Okafor, DE, Saints—Unfortunately, Okafor suffered a torn Achilles in Week 11. Okafor signed with the Saints as a free agent and helped the defense improve drastically. Though he played in just 10 games he finished with a career-high 43 tackles, 4.5 sacks, two forced fumbles and four passes defended.

The post Longhorns in the NFL: Some rest up while others hit stride in Week 17 appeared first on Hook ‘Em.