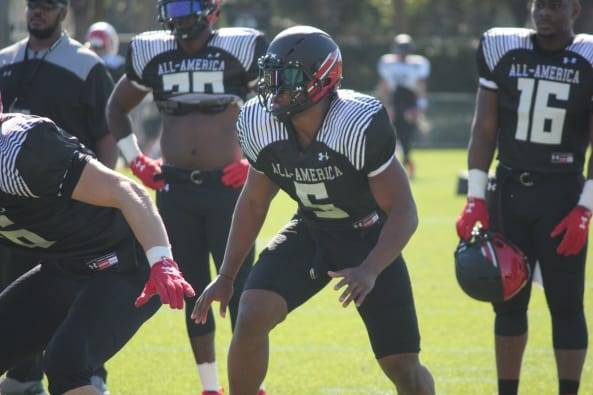 ORLANDO — It’s safe to say the defense out-performed the offense during Tom Herman’s first season in charge of the Texas Longhorns. While Herman and offensive coordinator Tim Beck struggled to find healthy personnel and consistency, defensive coordinator Todd Orlando was building the best defense in the Big 12.

Prospects noticed, even ones from across the country. Take Ayodele Adeoye, a middle linebacker originally from Missouri who spent his senior season at IMG Academy. The 6-foot, 231-pound bruiser is the top-rated out-of-state signee for Texas in the 2018 class. At the Under Armour All-America Game workouts, the 4-star heaped praise upon his future linebackers coach.

Orlando recruited Adeoye’s brother a few years ago, so they already had a relationship. And Orlando began recruiting Adeoye late in his junior year and made him the scholarship offer.

“He has a history of developing linebackers,” Adeoye said. “Orlando is good at what he does. Look at Malik from his sophomore to junior year. A lot of that was Todd Orlando.”

Jefferson’s departure means Adeoye could make an immediate impact in 2018. He’s set to enroll early and will compete with Anthony Wheeler at inside linebacker while also rotating with Gary Johnson in the spring.

“I’m ready to get to Austin and compete,” he said on Tuesday. “It’s a good position for me with the depth chart and I have complete trust in the coaching staff. I have a lot to work on, but I’m confident in my abilities.”

IMG Academy doesn’t possess a sterling reputation in the state of Texas. High school coaches in the state don’t like the idea of their best players leaving for another program. It has forced college coaches like Baylor’s Matt Rhule to declare he won’t recruit at IMG Academy. Lip service, no doubt, but still worth noting since recruiting in-state is a key for any coach to maintain success in Texas.

Still, the players hold a different opinion. IMG Academy in a min-college for the best and brightest. Adeoye credits it for preparing him for college, and not just on the field.

“Moving to IMG Academy was the best decision for me. It allowed me to enroll early and get used to playing against the best players across the nation,” he said. “I know what a college workload and schedule feel like because of my experience this past year. It’s given me confidence as a man and a student.”

The Longhorns want to add a third wide receiver to the 2018 class. Al’vonte Woodard and Brennan Eagles, both Fabulous 55 members, are already signed with Eagles set to enroll early and provide immediate depth in the spring. Jalen Preston, a Texas A&M commit, is one of the best wide receivers in the state and the Longhorns want to take advantage of him not signing early with the Aggies.

“One of the players we want to recruit this week is Jalen Preston,” Woodard said at Under Armour All-America Game check-ins last Saturday. “He’s a Houston guy like a lot of us and we need another wide receiver in the group.”

It doesn’t appear like the Longhorns will have much success. Preston is friends with a handful of Texas commits who are in Orlando this week, and he admits the group is recruiting him, but that doesn’t mean it is working.

“I’m loyal to Texas A&M,” said Preston, a 4-star prospect. “The only reason I didn’t sign with Texas A&M was because of the scheduling conflicts with my senior season and because I never got to take my official visit.”

With Preston seemingly off the board, Texas will turn its attention toward Yoakum wide receiver Joshua Moore. His brother, Jordan, is committed to A&M.