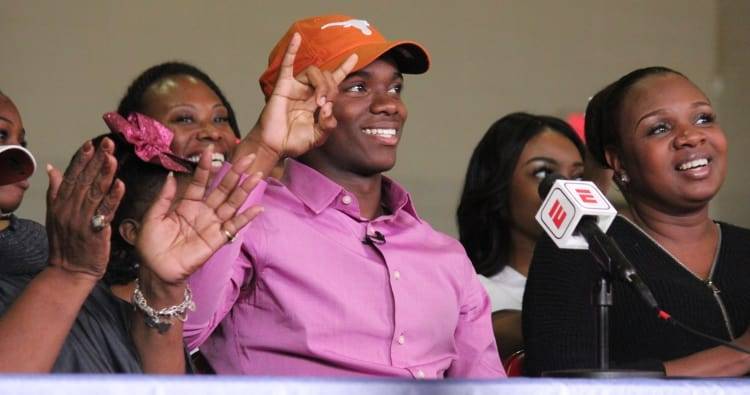 Among the handful of future Longhorns taking part in the U.S. Army All-American Bowl on Saturday is elite cornerback Anthony Cook.

One of the latest high-level talents out of Houston Lamar, Cook announced his commitment to Texas on Dec. 20, siding with the home-state Horns over Ohio State and LSU, and in doing so, became a headliner of Tom Herman’s 2018 class.

While there are no shortage of words that can be used to describe what Texas is getting in Cook — confident, competitive, focused, physical, etc. — the incoming coverage cornerback was asked to put the shoe on the other foot.

During a media availability at the Army Bowl practice on Tuesday, Cook played a game of word association with CBS Austin, in which he described Herman as “brilliant” and Texas football as “next level.”

“Trash,” Cook said of the Sooners, which he’ll now see at least once a year for the next three or four seasons.

An early enrollee, Cook is set to arrive in Austin in the coming weeks. Along with the expansive skill-set he’ll bring with him from Houston is a ready-to-compete mentality, which is good news for a secondary that’s now without two starters from 2017.

How long it takes Cook to take over a role in that secondary remains to be seen, but at the very least, he’ll arrive in Austin with the right mindset towards Texas’ Red River rivals.