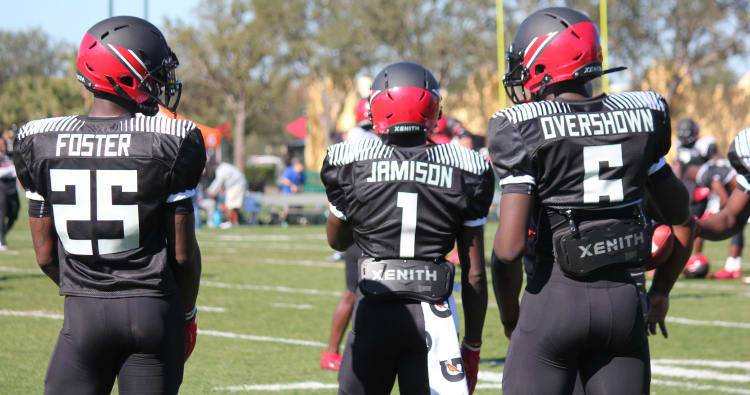 ORLANDO — Eight Texas commitments took the field Thursday night at World Camping Stadium in Orlando for the Under Armour All-America Game. All eight were on Team Highlight, which took home a 23-21 victory. Six of the eight Texas commits who were in attendance signed early with only running back Keaontay Ingram and defensive tackle Keondre Coburn yet to sign a national letter of intent.

It was a fellow Texan who stole the show for Team Highlight. Trinity Christian (Cedar Hill) running back Maurice Washington scored three first-half touchdowns, including two as a rusher. The uncommitted prospect became the first player in the Under Armour All-America Game history to score a touchdown as a rusher and a receiver.

Texas signee BJ Foster led the defense for Team Highlight, ending the game with three tackles, a forced fumble and an interception. His forced fumble came in the opening drive of the game and resulted in the first touchdown drive for Team Highlight, capped off by Washington. Fellow Texas signees DeMarvion Overshown and D’Shawn Jamison impressed in the secondary. Jamison also showed off his skills as a punt returner.

Earlier in the morning the Future 50 camp was held, featuring the best juniors in the nation. A dozen Texas natives were among those in attendance and some of the best performers from the camp were from the Lone Star State, and many hold Texas offers and interest.

The battle for the top spot in the 2019 class will be fierce and all the nominees attended World Camping Stadium in Orlando. Brian Williams, a 5-star safety who headlines the Next 25, was dominant in coverage and showed the range that makes him the top-rated safety in the 2019 class. Despite signing the best three safeties in the 2018 class during December, Williams maintained his interest in the Longhorns.

Texas needs bulk on the offensive line to become national title contenders and offensive tackle Kenyon Green from Atascocita made his claim to become the top-rated offensive tackle in the 2019 cycle. The 6-foot-6 5-star can play tackle or guard. He’s quick on his feet for a big man and powerful at the point of attack. He handles speed and power rushers with relative ease.

The state of Texas is becoming a hotbed of talent at the wide receiver position and a foursome of talented prospects from the state were at the showcase on Thursday morning. The best of the bunch was Jordan Whittington, a 4-star wide receiver from Cuero. 5-star wide receivers Theo Wease Jr. and Arjei Henderson also showed their talent. Jalen Curry, a 4-star St. Pius in Houston, was the only in-state wide receiver without a Texas offer and he’s hopeful one arrives soon.

The lone commitment in the 2019 class is 4-star Roschon Johnson. The dual-threat quarterback from Port Neches-Groves proved he’s more than just a runner playing quarterback. He made big throws down the field throughout the day and drove the ball well to receivers in tight coverage.

Noah Cain, a 5-star running back who transferred from Denton Guyer to IMG Academy (Fla.) before his junior season, was the most impressive running back in attendance. He mentioned Texas along with Ohio State as his current leaders.