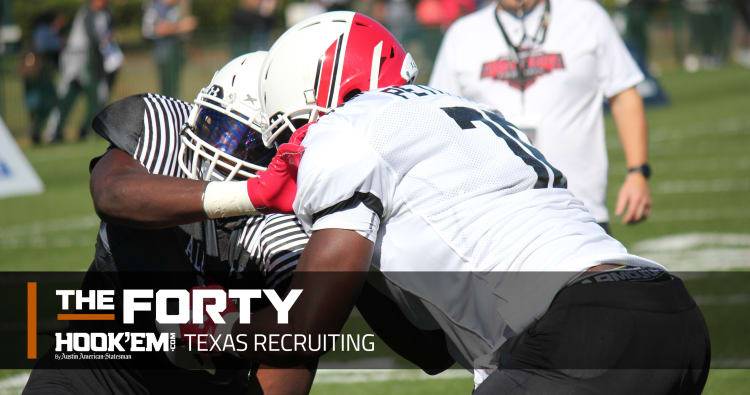 Longhorns far from done with 2018 class

ORLANDO — Texas took a giant step towards signing a national top 5 class during the early signing period when Tom Herman’s program earned signatures from 19 elite prospects. Two 4-star prospects at this week’s Under Armour All-America Game — Spring Westfield defensive tackle Keondre Coburn and Carthage running back Keaontay Ingram — remain committed to Texas despite choosing to wait until February to pen to paper on a national letter of intent.

Herman faced criticism after Texas’ 2017 class ranked No. 25 in the nation and included only 17 players. The low numbers in 2017 can now pay dividends for the Longhorns because early enrollees can be counted backwards to the previous class if it doesn’t reach the 25-man limit.

That means eight scholarships from the 2018 class can be applied backwards, allowing Texas to potentially sign upwards of 30 prospects when the dust settles after national signing day on Feb. 7. Two potential targets are in Orlando this week, surrounded by eight future Longhorns.

The Longhorns made a late run at offensive line, securing signatures from four offensive linemen during the early signing period. But Mikey Grandy is a JUCO product and Junior Angilau might take a 2-year LDS mission before enrolling.

That means Texas wouldn’t mind adding another prep lineman to the mix.

The best player available is Nicholas Petit-Frere, a 4-star offensive tackle from Berkeley Prep in Florida. The 6-6 lineman took visits to Michigan and Notre Dame before the early signing period, but decided not to sign and take his time in the process. He’s still deciding which programs to visit before the next signing day.

“I was trying to focus on football during the season,” Petit-Frere said. “Between football and school, it’s hard to put energy into taking all five official visits. There was no need to rush because I’m not enrolling early. I can evaluate my options.”

The eight Texas commitments joining him in Orlando for the Under Armour All-America Game are making Petit-Frere a priority. Even wide receiver signee Al’vonte Woodard mentioned the massive offensive tackle by name when asked who the Longhorns were recruiting in Orlando. He’s appreciative of the affection, but it won’t be a deciding factor.

“They’re respectful about my process and I’m humbled that they want me and that Texas is a great program. I’m truly grateful for how respectful they’ve been in understanding it is my decision,” he said. “The coaches have talked to me. It is a great school and one of the storied programs in college football.”

Petit-Frere doesn’t know which schools will get his remaining official visits. He said he needs to work on his pad level and sense of urgency during the week. He’s starting at left guard for Team Spotlight in Thursday’s game.

Joshua Moore is back in the mix

Joshua Moore had a busy 2017. The 4-star wide receiver from Yoakum moved to IMG Academy in the spring, then moved back to Yoakum for his senior season. He committed to Nebraska, then de-committed after the Huskers’ coaching change.

Now he’s a month away from signing day, and he knows his decision is looming.

Moore said he wants to cut his schools down to a final three so that he can narrow down his focus.

“Everyone assumes I’m headed to Texas A&M because my brother (Jordan) is committed there, but it isn’t true,” Moore said. “We both need to make the right decision for ourselves.”

Texas wants a third receiver for 2018 following the de-commitment of Rondale Moore. Moore, a 6-1 receiver with the ability to play outside or as a slot, received a call from Texas receivers coach Drew Mehringer the night of his de-commitment. Mehringer was on Yoakum’s campus the next day.

“Texas is definitely in the mix, along with some other schools,” Moore said. “I like what is going on at Texas and this class in particular is something special. It’s a tough decision, man. Luckily, I still have time to go on more visits and make a decision.”