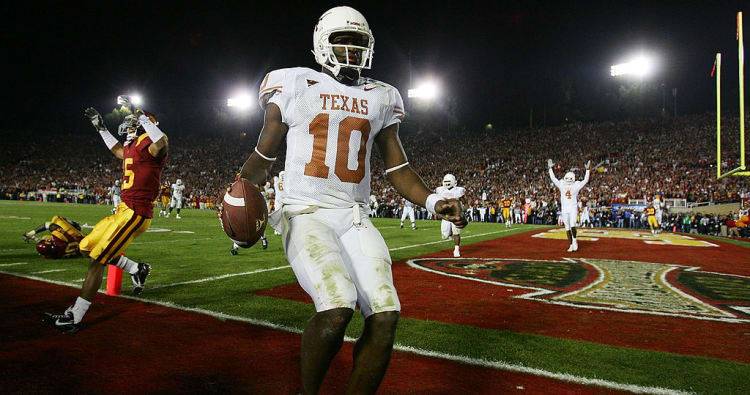 “4th and 5, the National Championship on the line right here.”

On this day 12 years ago, Keith Jackson uttered some of the most memorable words from quite arguably the greatest college football game ever played — the 2006 Rose Bowl National Championship between No. 1 USC and No. 2 Texas.

In what became a back-and-forth battle between two true college football heavyweights, the Longhorns found themselves trailing a star-studded Trojans squad by 12 with less than seven minutes remaining. All the signs pointed towards USC, the dynasty that is was, hanging on to hoist its third consecutive championship trophy.

Then Vince Young happened, and well, you know the rest.

On this date in 2006, Vince Young led Texas to victory over USC with one of the most iconic plays in college football history. pic.twitter.com/io41ur6u8t

Young capped his collegiate career with nearly 500 yards of offense against USC, and far more importantly, led the way for Texas’ first National Championship in more than 30 years.

Since that Jan. 4 night at the Rose Bowl, the Longhorns are yet to replicate such success. Colt McCoy guided Texas to the 2010 BCS National Championship, but an early shoulder injury ended McCoy’s career in Austin and the Longhorns hopes of a second championship in five years.

Fast forward to Jan. 4, 2018, and things in Austin are a bit different than they were at the front end of 2006. Following its recent Texas Bowl victory, Texas is coming off of its first winning season since 2013 after recording a 16-21 record in three years under Charlie Strong.

The hope for the Horns these days, though, is that Tom Herman and his staff can help Texas return to the prominence and championship celebrations the Longhorns were able to enjoy on this day 12 years ago.