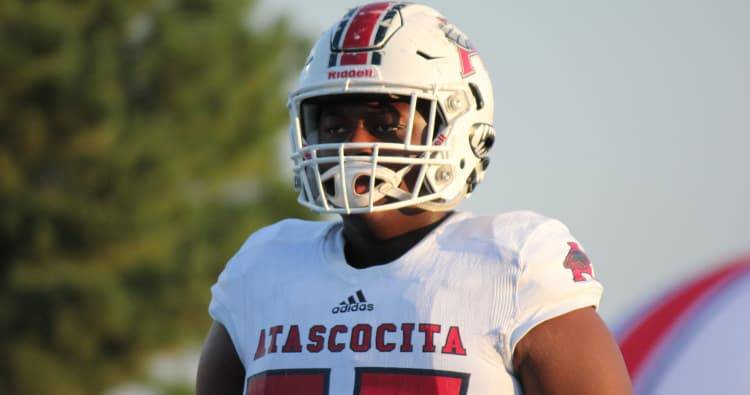 ORLANDO — Talent wants to follow talent. It’s a statement echoed on the recruiting trail. It isn’t a coincidence that the same programs end each recruiting cycle jockeying for the designation as top class. Great players want to play with great players.

No one knows if the recruiting success of Tom Herman and his staff will carry over to the football field. But it does appear that recruits in the 2019 class took note of the Longhorns landing the bulk of the top players in the state during the 2018 cycle.

“I have a bunch of friends that are in that Texas recruiting class, so they’re going to push me hard,” said Kenyon Green, a 5-star offensive tackle from Humble Atascocita and a former LSU commit. “I’ve known Keondre Coburn my whole life. He’s already on me to get down there and help rebuild the program with them.”

Texas’ lone commitment in the 2019 class is Roschon Johnson, a 4-star dual-threat quarterback from Port Neches-Groves. The 6-1, 192-pound junior will be the unquestioned leader of the Longhorns’ 2019 class and he’s surrounded by nearly a dozen fellow targets at this week’s Under Armour Future 50 Camp in Orlando. His roommate is 5-star wide receiver Arjei Henderson from Fort Bend Travis — and he won’t be Johnson’s only target in Orlando.

“I’m sure as soon as I see Roschon, he’ll be throwing up the Horns at me,” said Allen 5-star wide receiver Theo Wease Jr. “Texas is a great school and I’m sure my relationship with the coaching staff there will continue to grow through the process. They got an amazing group of players in the 2018 class.”

That’s not to say some recruits don’t see the stacked 2018 class as a detriment. Two in-state defenders — Fort Bend Bush cornerback Erick Young and Flower Mound Marcus outside linebacker Marcel Brooks — think the depth arriving at Texas before next season is a reason to look elsewhere.

“I’m not really interested in Texas anymore,” Brooks said. “They are not in my top four because of the heavy class in 2018.”

The 2017 season proved Texas won’t succeed on the football field until it improves on the offensive line. The easiest way to improve is to recruit better players. The Longhorns hope former LSU commit Kenyon Green can be an anchor for the future.

The 6-5, 315-pound 5-star offensive tackle is the top-rated player at his position in the state of Texas for 2019 and is one of four players across the nation that holds a Texas offer at the position.

“Texas coach (Derek) Warehime tells me they’re losing linemen and need big boys to come play for them,” Green said. He also noted the sales pitch of staying in-state is working. “The in-state thing does appeal to me. They’re making it a point to try and keep the best talent in Texas.”

LSU remains in the running for Green despite the recent de-commitment. Oklahoma, Texas A&M, TCU, Alabama and Florida are also in hot pursuit.

Texas isn’t one of the 17 schools that have offered 4-star defensive end NaNa Osafo-Mensah. The Fort Worth Nolan Catholic product is quickly rising up the recruiting charts and is looking hard at programs like Oklahoma, Texas A&M, UCLA and TCU. The Longhorns could be in the mix with an offer.

“I was a big fan of coach (Kevin) Sumlin. I know coach Jimbo Fisher is also a great coach, so it doesn’t change for me,” he said. “I’m hoping an offer comes from Texas. I’ve always adored Texas and the football program. I keep in contact with coach (Oscar) Giles.

“In the beginning, it was kind of hard to balance football and the extra attention with recruiting,” he added. “I’m expected to be a leader on my team, so I humbled myself and put my effort into the football season. I can worry about recruiting more now that the season is over.”