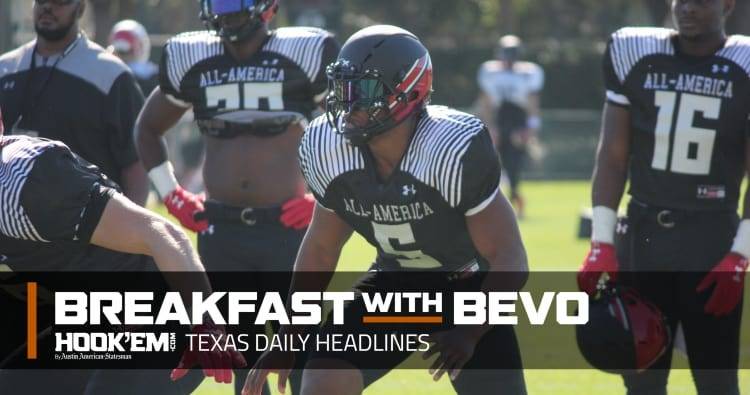 Texas recruit aims to add talent at Under Armour camp

Roschon Johnson is the only high school star committed to the Longhorns for the Class of 2019. He hopes to change that while at the Under Armour Future 50 Camp in Orlando, Fla. The camp is a showcase for the 2019 class, occurring ahead of the Under Armour All-America game on Thursday. Johnson will look to encourage the likes of Arjei Henderson, Jordon Whittington and Theo Wease Jr. to join him at Texas.

Middle linebacker Ayodele Adeoye, the top-rated out-of-state signee for Texas in the 2018 class, noticed the progress the Texas defense made this season. So it’s safe to say defensive coordinator Todd Orlando played a big role in getting the 4-star linebacker to sign with Texas. The two already had a relationship since Orlando pursued Adeoye’s brother a few years ago. Adeoye also credits Orlando for the development of Malik Jefferson this season.

Lashann Higgs scored a career-high 30 points as the Longhorns needed a comeback to defeat Oklahoma State 84-79 at the Erwin Center on Wednesday night. Texas trailed by 7 points in the fourth quarter, but Higgs scored 9 in the frame to get the win. Sug Sutton made a pair of baskets late in the game while Higgs gave the Longhorns the lead with 2:35 to play. Texas improved to 12-1 overall and 3-0 in the Big 12.

New Texas AD not 1 to mess with tradition

In a back-and-forth with some Twittter followers, new Texas athletic director Chris Del Conte expressed no desire to add alternate uniforms for the football team. Del Conte communicates with fans on Twitter at times and answers questions they may have. When the topic of alternate uniforms came up, he distinguished non-traditional programs with traditional ones. He sees Texas more along the lines of a Penn State versus an Oregon.

The Texas Longhorns are ranked No. 18 in a “way-too-early” college football rankings list released by Athlon Sports. Obviously, the rankings come too early given that the bowl season is just coming to a close. Speculation and hype is the status quo in college football, however. Ranked second highest among Big 12 squads, Texas is only behind No. 6 Oklahoma.