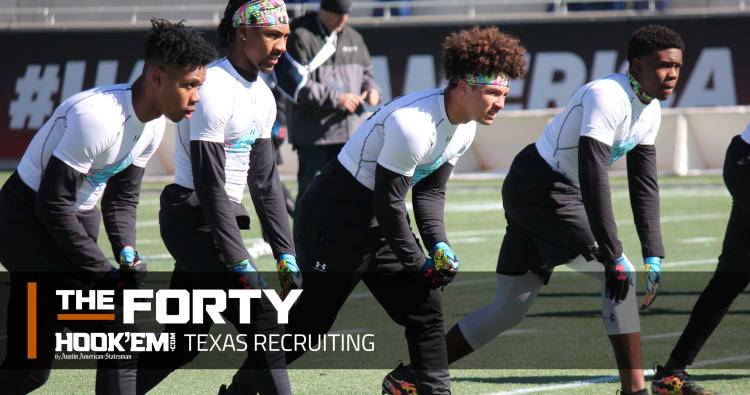 ORLANDO — Noah Cain moved to IMG Academy from Denton Guyer prior to his junior season. The 5-star running back enjoyed immediate success and solidified himself as one of the top backs in the 2019 class. He holds 23 offers and was on hand for the Future 50 in Orlando.

“The experience at IMG helped me a lot,” Cain said. “When I get to a showcase like this one, it feels like another day of practice. I compete against the best every day and get coached hard.”

The 5-11, 207-pound running back is high on the Longhorns because of assistant coach Stan Drayton, and lists Ohio State, Oklahoma, Miami and LSU in high regard. Cain wants to take the process slow and narrow down his list into a top 5 by the summer.

“I can’t look at the coaches at a program because nowadays that changes so much. It really comes down to where you feel comfortable and where you can be a student for your career,” Cain said. “There are a lot of factors to weigh. I am an early enrollee so my plan is to get my body right and win the starting job as a true freshman.”

Texas is likely to be in the mix when Cain narrows his list. Ohio State is guaranteed to be a contender for his commitment because of his relationship with La Grange native and fellow running back JK Dobbins, who starred at Ohio State as a freshman. Cain described Dobbins as a big brother.

“A lot of schools are starting to learn it’s about the talent instead of seniority,” he said. “Texas is a team that came on me late because of the new staff. I feel comfortable with that coaching staff and see it developing more from here. Coach Drayton develops NFL running backs.”

2019 is stacked with in-state wide receivers

The dependence on 7-on-7 football has impacted the high school game in many ways, some good and some bad. One of the unquestioned changes over the past decade in Texas is the number of wide receivers the Lone Star State is known to produce. A state once known for running backs, linemen and linebackers is now a hotbed of talent at quarterback, wide receiver and in the secondary.

The 2019 class might be the most talented and deep yet. The Future 50 is a collection of the top juniors in the country. The state of Texas sent four wide receivers — Arjei Henderson, Theo Wease Jr., Jordan Whittington and Jalen Curry — to the event. Henderson, Wease and Whittington hold offers from Texas, while Curry, a member of The Next 25, is hopeful to receive one soon.

The Longhorns have also extended offers to in-state wide receivers Kam Brown and Lake Travis star Garrett Wilson. Add in local prospects like Bowie’s Elijah Higgins and Cedar Ridge’s Jaylen Ellis and Texas will find it easy to locate the talent needed to fill the wide receiver spots in the 2019 class. The Longhorns signed two receivers during the 2018 early signing period and hope to add a third by national signing day.

Expect the Longhorns to take at least three receivers in the 2019 class. Henderson named Texas and Oklahoma as his top two earlier in the week and is rooming with Texas quarterback commit Roschon Johnson this week. Whittington is considered a Texas lean, while Wease is a player Texas still needs to continue pursuing. Curry could hold a Texas offer by summer.

Texas signed the best secondary class in the nation during the early signing period when the top three cornerbacks and safeties in the state inked to play for the Longhorns. That won’t stop Texas from searching for the next crop of secondary members in 2019, and it seemingly won’t stop the interest from Brian Williams, the state’s top-rated safety.

“You should go into a program ready to compete with the people who are in front of you and the people they recruit after you,” Williams said. “Every top college is going to recruit the best players it can at each position and then the best wins the job. There will be competition for playing time no matter what school I choose. I’m ready for that.”

Williams wants to be an engineer and the Longhorns are high on his list, along with Stanford and Notre Dame, because of the school as much as the football program. Academics are important to the private school product and he plans to make his college decision in the summer after taking advantage of official visits in the spring, which are now available for the 2019 class because of the advent of the early signing period.

The post 2019 is the year of the wide receiver; Noah Cain talks Texas, recruiting appeared first on Hook ‘Em.

ESPN: Texas primed for a Year 2 leap under Tom Herman