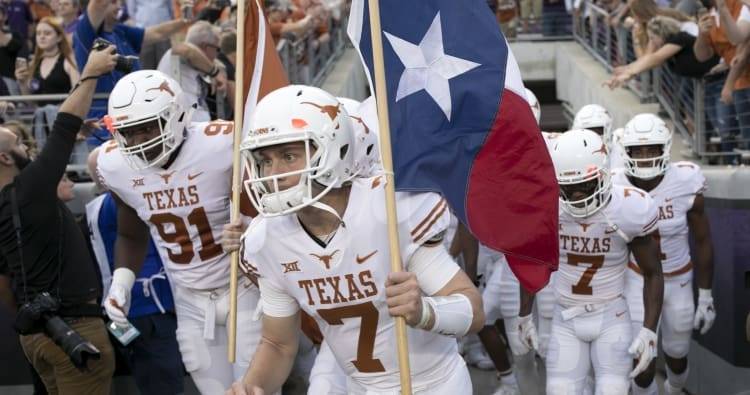 Texas is back, folks?

Well, not exactly; at least yet. But for the first time, Texas is back above .500 at the end of the season, as a 33-16 Texas Bowl victory over Missouri lifted the Longhorns to 7-6 — the program’s first winning record since 2013.

Pair that with what’s currently the nation’s No. 3-ranked recruiting class, which would be the Longhorns best finish since 2012 if Texas remains in its current place, and there’s reason to believe Tom Herman has the Horns headed in the right direction following his debut season.

For a program and fan base starved for the prominence it enjoyed nearly a full decade ago, though, the next step will be expected as Herman enters his second season in Austin.

Mitch Sherman of ESPN argued that such a leap is quite possible, citing several recent examples as proof.

“The Year 2 leap is a real thing. You saw it this season with Georgia, Miami and UCF,” Sherman said. “Almost 20 years ago, Bob Stoops won a national title in his second season after taking over a program stuck in neutral at Oklahoma. Pete Carroll went from 6-6 at USC to 11-2. Nick Saban jumped from 7-6 to 12-2. So why not Tom Herman at Texas?”

“You know it will be expected in Austin, what with Herman’s culture in place and a bowl victory that pushed Texas to its best finish since 2013,” Sherman added.

For Texas’ hopes of a Year 2 leap, there’s good news and bad news.

On one hand, the Longhorns lose their share of talent to graduation or the NFL, including Malik Jefferson, DeShon Elliott, Connor Williams, Poona Ford and Holton Hill. On the other hand, much of the Big 12 will be without key pieces, as well, with Baker Mayfield headlining Oklahoma’s exodus and Mason Rudolph and James Washington doing the same for Oklahoma State. USC, the Longhorns Week 3 opponent, will also be without star quarterback Sam Darnold, who is headed for the NFL, while TCU losing much of its 2017 starting cast.

With the 2018 schedule set to be considerably less daunting than it was during Herman’s debut season, avoiding upsets like those against Maryland and Texas Tech and stealing a win or two over USC, Oklahoma, Oklahoma State or TCU could very well mean the leap the Longhorns have craved for so long finally comes to fruition.

2019 is the year of the wide receiver; Noah Cain talks Texas, recruiting