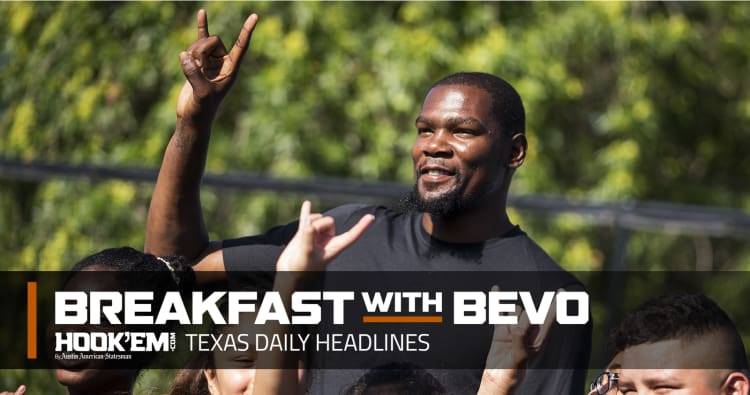 He wasn’t at the University of Texas for long, but Kevin Durant must have enjoyed his time playing with the Longhorns. On Thursday he gave a record-breaking $3 million to the Texas basketball program and the Center for Sports Leadership and Innovation. Durant’s donation is the largest ever by a former Longhorns basketball star. As a result, the main entrance at Cooley Pavilion gets a new name. It will now be known as the Kevin Durant Texas Basketball Center.

Eight high school stars committed to play for the Longhorns were at the Under Armour All-America Game in Orlando, Fla., on Thursday night. They played for Team Highlight and came away with a 23-21 victory over Team Spotlight. Two of the Texas recruits, Keaontay Ingram and Keondre Coburn, have yet to sign national letters of intent. BJ Foster had the best performance out of the Texas recruits, making an interception, forcing a fumble and making 3 tackles. It wasn’t all good for the Longhorns as one of their targets, linebacker Nik Bonitto, verbally committed to Oklahoma over Texas at halftime.

His wrist is better now, but it appears that Andrew Jones is dealing with an unknown illness, Longhorns beat writer Brian Davis reports. Coach Shaka Smart expressed that Texas is still trying to figure out what ails the guard. Jones hasn’t had the energy to put in a full effort since returning from a fractured wrist. He played in just 11 minutes of UT’s win over Iowa State on Monday.

ESPN: Texas primed for a Year 2 leap under Tom Herman