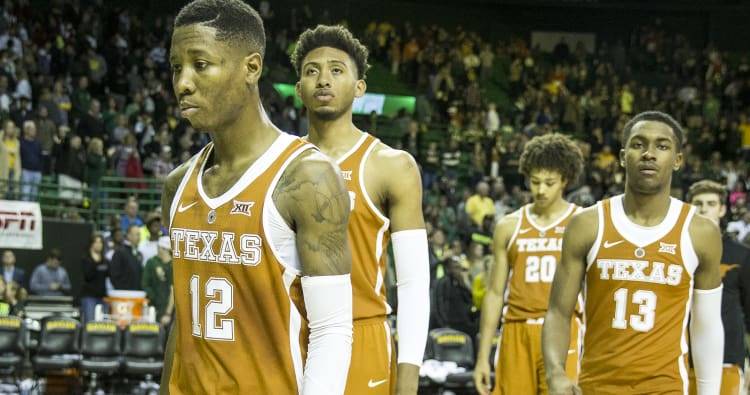 WACO — The reason why Baylor captured a 69-60 win over Texas at the Ferrell Center on Saturday can be summed up with one play.

Maston couldn’t stand for that. The senior simply ripped the ball away from the freshman and drew a foul in the process. Maston hit two free throws, giving Baylor a five-point lead and it was basically over.

“I was really just trying to get it back,” Maston said. “I made one mistake, but like coach (Scott) Drew says, don’t let one mistake lead to two. So i just wanted to get it back for my team and change the momentum.”

The Bears (11-4, 1-2 Big 12) simply wanted it more. That one play negated Febres’ season-high 18 points in his first start. It embodied a day where Texas shot only five free throws compared to Baylor’s 21.

And it highlighted what Texas coach Shaka Smart has been saying all along. The Longhorns (10-5, 1-2) must do all the things that go into winning. Part of that is constantly being the aggressor.

Febres’ turnover was a major swing moment as Texas did not score a single point in the final 5 minutes, 3 seconds. Baylor’s Mark Vital sent one last-gasp shot attempt toward the Brazos River. The Horns scored only 20 points in the second half and made just 8 of 26 3-point shots overall.

“Definitely a learning moment,” Febres said. “I know I need to be more aggressive, of course. The Big 12 is a big league with big, strong physical guys. And I know when I get a secure rebound, I need to aggressively get it. Elbows out and just not let it happen again.”

Bamba quickly interjected and said, “And it wasn’t his fault. It actually started with me.

“I think there was a lob or something like that, and I just tapped it,” Bamba continued. “One thing (assistant coach Darrin) Horn is big on is eating the ball, jumping to the ball and finishing possessions out. Had I tapped it, it could have been a different game.”

Febres just shook his head and said, “Regardless, I know I just need to be more aggressive.”

Drew had no issues with Febres’ aggressiveness most of the day. Baylor tried to recruit the Houston-area product. It came down to the Bears and Longhorns.

Smart gave Febres the starting nod over Jacob Young, who hasn’t scored at all the last two games. The Bears probably didn’t have Febres on the scouting report. But Drew was going mad in the first half as Febres hit four 3-pointers.

“We knew he liked Baylor because he narrowed it down to us and Texas,” Drew said. “We just didn’t know he liked the floor that much.”

Bamba had 15 points, nine rebounds and five blocks with Chicago Bulls general manager Gar Forman watching from the stands. But truth be told, Bamba wasn’t all that aggressive about it. Neither was Dylan Osetkowski. He had eight points and eight rebounds but was 2 for 7 from 3-point range and passed up a critical shot opportunity late.

“We got tentative,” Smart said with a puzzled look. “We passed up a couple of shots that were really good looks that we need to take, and we didn’t execute.”

Several Horns were out of sorts on Saturday.

Kerwin Roach Jr. almost got his second technical foul in as many games after a goaltending call. Roach spent time in the second half sitting on the bench getting chewed out. “He hasn’t been himself the last couple of games,” Smart said.

Eric Davis Jr. stepped on the gas at times and finished with seven points. He looked out of control on a few possessions in the first half, too.

As the team’s starting point guard, Matt Coleman must shoulder some blame for the uninspiring offensive sets down the stretch. “He’s had so many good moments this year of being our steering wheel, being the guy that sets the course for us,” Smart said. “That didn’t happen today.”

Chalk this up as a learning experience in a league where every lesson comes with a price.

“This is a game we could have easily won,” Bamba said. Indeed.

Jones misses trip: Guard Andrew Jones did not make the trip to Waco and remained in Austin with an undisclosed medical issue. The school typically acknowledges most injuries, however there is little information being shared about Jones’ status.

“I’m really not able to say much right now,” Smart said. “He’s obviously not feeling well. Out of respect for his family and their privacy, I have to leave it at that.”

Smart has admitted that Jones’ wrist injury is healed. That kept him out of four games in December. The sophomore from Irving played against Kansas and Iowa State, though.

Smart said on Monday that Jones was undergoing medical tests to see what the issue could be.

The post Baylor 69, Texas 60: ‘This was a game we could have easily won’ appeared first on Hook ‘Em.