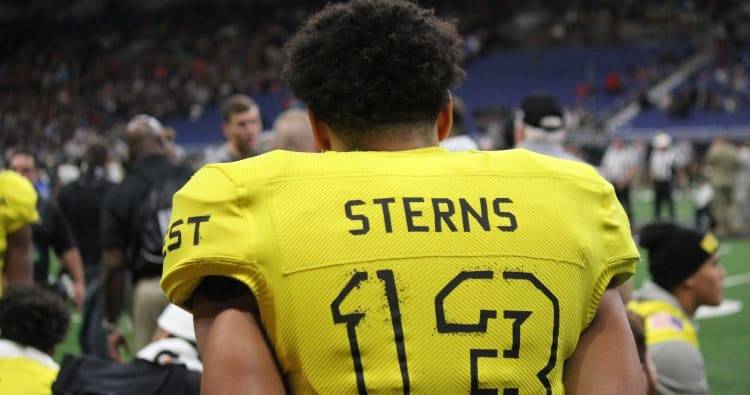 SAN ANTONIO — A defensive struggle at the U.S. Army All-American Bowl erupted into a fourth-quarter shootout with West knocking off East, 17-16, in San Antonio on Saturday afternoon. The two teams were tied at 3 heading into halftime and at 10 with 9:12 in the fourth quarter following a touchdown pass from J.T. Daniels to Amon-Ra St. Brown.

Five future Longhorns took part in the contest, all playing for West. Sterns made the most impact, intercepting a pass in the first and fourth quarter. Sterns was named the Pete Dawkins MVP of the Army Bowl for West after causing two of his team’s three turnovers.

He showed off the versatility that makes him one of the top players in the state, spending time at safety, nickel and cornerback. Sterns plans to enroll at Texas in January and participate in spring practice.

“I had to put on in front of my city one last time,” Sterns said after the all-star game. The Cibolo Steele star played his high school football less than 20 miles from the Alamodome. “It was a great week and experience. It’s an honor to be among these players and to play in front of our military.”

Cornerback signees Anthony Cook and Jalen Green started for West. The duo are the highest-rated cornerbacks in Texas for the 2018 cycle. Green, the current No. 1 player on the Fabulous 55, recorded a pass deflection and multiple tackles. It was a quiet outing for Cook because the East squad avoided his side of the field for much of the game.

“It was cool to play with so many future teammates and really get to know these guys on a personal level, especially our future teammates that aren’t from Houston,” Cook said. “We’re going to be a great secondary at Texas and we showed why tonight.”

The stars of the game were on defense, but two future Longhorns were on the offense for West. Junior Angilau, a 4-star offensive lineman from Utah, started the game at right guard and was named a team captain. The 6-foot-6 prospect is one of four offensive linemen committed to Texas in the 2018 class. Angilau is still deciding if he’ll take a two-year LDS mission before enrolling at Texas.

“This game was a great honor and it’s because we were playing in front of our U.S. Army. It wasn’t just about football this week and that is important to remember,” Angilau said. “It was a great game and I hope we gave the soldiers a show.”

Brennan Eagles, who signed during the early signing period and will enroll early at Texas, played wide receiver for West but finished the game with no catches.

Former Texas commit Rondale Moore, a 3-star slot receiver out of Kentucky, chose Purdue during the game. The West won despite committing more penalties (11) than first downs gained (10). East also dominated in time of possession and field position. Three turnovers caused by West, all interceptions, were the difference in the game.