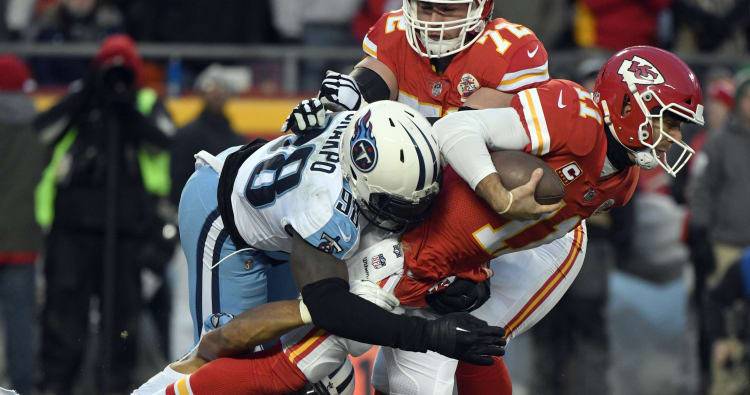 Is there such a thing as a former Longhorn? These players will always be Longhorns to University of Texas fans, even though they’ve graduated to the next level of football. Every week we’ll update you on how they performed the previous weekend. Here’s a look at the Longhorns in the NFL and how they fared in the wild-card round of the playoffs.

After one week of the NFL playoffs just four former Longhorns remain. Three were on bye while one came away with an unlikely upset win.

Brian Orakpo and the Tennessee Titans were heavy underdogs to the host Kansas City Chiefs. They trailed 21-3 at halftime but the defense shut out the Chiefs in the second half and the Titans pulled out a 22-21 win. Orakpo made two tackles and had 1.5 sacks in the game. He also hit Alex Smith twice. The divisional round will be a much tougher task as the Titans travel to face the New England Patriots.

Derrick Johnson probably had the best game of the former Longhorns, but he was one ruling away from being the hero on Saturday. Johnson and the Chiefs trailed Tennessee with two minutes to play when Derrick Henry apparently fumbled. Johnson scooped up the ball and took it 56 yards for what appeared to be the go-ahead touchdown. Alas, the play was overturned on review as Henry was ruled down by contact.

The almost game-changing fumble return for a touchdown by Derrick Johnson, it was called a fumble on the field but will be called back pic.twitter.com/uo6fOhhTff

Johnson finished the game with eight tackles and this bone-crunching sack of Marcus Mariota.

DERRICK JOHNSON, what a play! pic.twitter.com/T4mRv53hFf

The only other players in action during the wild-card round were running backs Fozzy Whittaker of Carolina and Malcolm Brown of the L.A. Rams. Neither had a big impact in their teams’ losses. Whittaker had one carry for three yards in the 31-26 loss to the Saints. Brown rushed twice for 14 yards as the Rams fell 26-13 to the Falcons.

Brian Robison, DE, Vikings—Robison and the Vikings are rested up for their contest with the Saints on Sunday.

Malcom Brown, DT, Patriots—Brown and the Patriots are big favorites as they host the Titans on Saturday after earning the first-round bye.

Marcus Johnson, WR, Eagles—Johnson hasn’t had significant playing time at receiver, but his Eagles host the Falcons in the early game on Saturday.

Alex Okafor, DE, Saints—Okafor suffered a torn Achilles in Week 11. He signed with the Saints as a free agent and helped the defense improve drastically. Though he played in just 10 games he finished with a career-high 43 tackles, 4.5 sacks, two forced fumbles and four passes defended.

Kenny Vaccaro, S, Saints—Vaccaro wasn’t able to finish the season as he dealt with a groin injury that wouldn’t go away. He was placed on injured reserve on Dec. 21. Vaccaro ended the year with 60 tackles, 1.5 sacks and a career-high 3 interceptions.

RELATED: Longhorns in the NFL: Week 17

The post Longhorns in the NFL: wild-card round highlighted by defense appeared first on Hook ‘Em.

Matt Coleman ‘trusting the process’ while riding the ups, downs as the Texas point guard