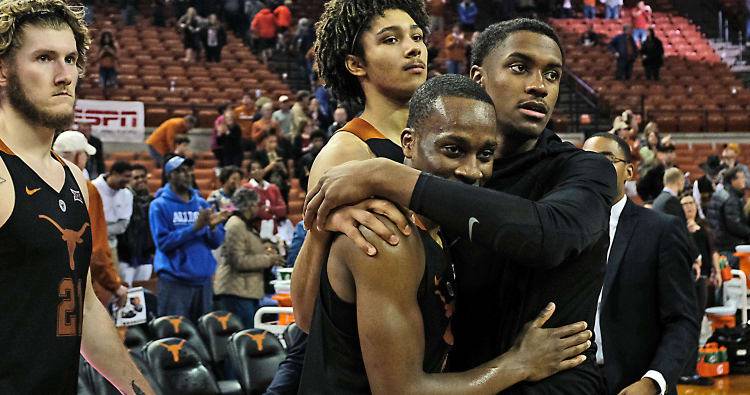 Quarterbacks always get a disproportionate credit and/or blame for the team’s ups and downs. The same applies to point guards.

Texas freshman Matt Coleman welcomed the sky-high expectations of being coach Shaka Smart’s floor general. He’s been up and down, too, just like you’d expect of any newcomer making his way at this level.

Coleman said he’s got “a lot more confidence, day by day, just being more prepared. I think the biggest thing is being prepared and just trusting the process and not being focused on the results.”

Texas (10-5, 1-2 Big 12) needs this 6-2 athlete from Virginia to take full command on Wednesday against 16th-ranked TCU and throughout the coming weeks.

College basketball is a guard-driven game, and the league is full of terrific ball-handling magicians again this season. Coleman’s seen only a fraction of what this league has to offer in Kansas’ Devonte’ Graham. TCU’s Jaylen Fisher will be a stiff test, as will West Virginia’s Jevon Carter and Oklahoma’s dynamite Trae Young.

Smart believes he’s got a player of that ilk. Coleman has the fourth-highest assist-to-turnover ratio in the league. But it’s clear if Coleman isn’t participating offensively, this team could struggle.

Take the Iowa State win, for example, Coleman had 12 points and nine assists. But it was his moxie in overtime that made the difference. Twice, Coleman penetrated the lane for critical baskets. He also sealed the 74-70 victory with four free throws in the last 8.1 seconds.

“He’s got a lot of guts,” Smart said afterward. “The good thing about Matt is that with those guys, they don’t go away when he’s not playing particularly well.”

But look at what happened against Baylor last Saturday. Coleman had just six points and was 3 for 9 shooting. He had five assists and three turnovers. Things worked fine as long as freshman Jase Febres got loose for 18 points in the first half.

But the game changed dramatically when Baylor forced Texas into a more half-court game in the second half. The offense stagnated at times, and the Horns didn’t score a single point in the last 5:03. Whose fault was that? Shane Buechele and Sam Ehlinger know who’ll get it in the court of public opinion.

“Matt and I are going to spend a lot of time together over the next few days,” Smart said. “He has to do a way better job as the quarterback of our team. He’s had so many good moments this year of being our steering wheel, being the guy that sets the course for us. That didn’t happen today.

It’s certainly not, but that’s how it goes for the starting point guard. Even Coleman admitted he didn’t play well against Tennessee State, despite the fact his mid-range floater with 9 second left sealed the victory.

Instead of being excited about his first game-winning shot, Coleman was staring a hole through the stat sheet. The Horns were 3 for 21 from 3-point range and shot just 35.3 percent overall.

“No need to point the finger,” Coleman said “It’s just collectively, we’ve got to stay patient and poised on the offensive end and it will work for itself.”

Fisher was the driving force behind TCU’s run to the postseason NIT title last season. He was the major reason why the Frogs started 12-0 this season. Fisher is just one of many tests Coleman will see throughout the rest of the season.

No update on Jones: Smart said Tuesday would continue to honor Andrew Jones’ right to privacy and offered no update on the sophomore guard’s health. Smart said last week that Jones was fatigued for no apparent reason and was undergoing tests to determine the cause.

The post Matt Coleman ‘trusting the process’ while riding the ups, downs as the Texas point guard appeared first on Hook ‘Em.

Longhorns in the NFL: wild-card round highlighted by defense