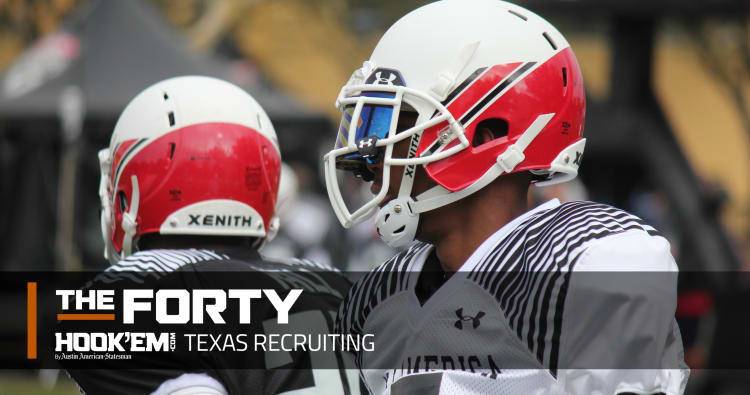 Texas enters the final month of the 2018 recruiting cycle with 19 signatures. Add in commitments from running back Keaontay Ingram and defensive tackle Keondre Coburn, and the Longhorns get to narrow their focus leading into the Feb. 7 National Signing Day.

The Longhorns are set at quarterback and in the secondary. The targets remaining will be at positions like wide receiver, tackle and defensive line. It wouldn’t be shocking for Texas to search out another linebacker before the class ends, but the linebackers offered by Texas in the cycle are committed.

Expect Texas to sign upwards of 30 prospects. That means, theoretically, the Longhorns could identify nine more targets before signing day. Here are five to watch for in the final month.

The best remaining wide receiver in the state is a slot receiver and that’s exactly what the Longhorns need to pair with outside receivers Brennan Eagles and Al’vonte Woodard. Waddle would be a perfect replacement for Rondale Moore, who de-committed from Texas in December and pledged to Purdue at the U.S. Army All-American Bowl on Saturday. Waddle is the best slot receiver in the state and would give Texas a trio of fantastic in-state wideouts.

Texas signed four offensive linemen during the early signing period and each could play tackle. JUCO product Mikey Grandy is the most college-ready, while Rafiti Ghirmai and Reese Moore likely need time to develop before competing for snaps. Junior Angilau, the best offensive lineman in Texas’ class, might take a two-year LDS mission before enrolling in college. That means the Longhorns could use another option at the position; Petit-Frere would be a home run signee for Texas because he could immediately push for playing time at either tackle position.

Texas failed to sign a single defensive lineman during the early period. It’s the only true void in an otherwise great 2018 class. The Longhorns hope Coburn stays the course and signs on Feb. 7. Regardless, Ojomo is a legitimate target who is picking up major offers. Texas A&M and Oklahoma also offered him late in the season.

Defensive coordinator Todd Orlando’s scheme doesn’t place an emphasis on ends. Texas spent most of 2017 playing two defensive tackles, one defensive end and four linebackers in the front seven. That doesn’t mean the Longhorns aren’t looking for versatile big men who can play multiple spots up front like Charles Omenihu and Malcolm Roach. Alexander is an under-the-radar recruit, but he’s a big-bodied end who can handle double teams at the point of attack and create penetration.

Texas wants another receiver after losing Rondale Moore to Purdue. Joshua Moore is a solid option. The one-time Nebraska commit was great in practice at the Jan. 4 Under Armour All-America Game. He’s a strong route-runner and smooth in the open field. His twin brother, Jordan, is committed to Texas A&M. He will take an official visit to Texas this weekend.

Texas needs help at defensive end and Carson is a big-bodied player who can play multiple positions along the line, much like Alexander. Carson was offered by Texas months ago and he took an official visit on Sept. 9. The Longhorns are making another push after missing out on defensive ends in the early signing period.

The post Texas recruiting: Longhorns’ wish list with a month left in next cycle appeared first on Hook ‘Em.