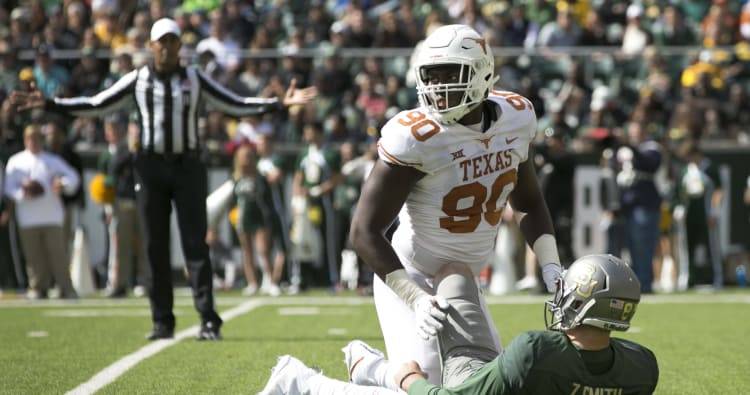 The last play of Charles Omenihu’s junior year — a fumble-forcing sack in the Texas Bowl — won’t be his last as a Longhorn.

Omenihu announced on Tuesday that he will return to the Longhorns for his senior season. A defensive end, Omenihu had toyed with the idea of entering the NFL Draft. (Draft analyst Dion Caputi had even pegged him as possibly a second- or third-round pick). Omenihu, though, will instead return to UT’s defense in 2018.

After talking to my parents, coaches and many nights of prayer I am proud to announce that I will be…

In addition to a video about his decision, Omenihu also released a statement through the school:

First of all, I want to thank everyone who has supported me during the decision-making process. From my family, to my teammates, to the coaching staff, I’ve had all the support I could ask for, and I can’t express how much I appreciate that from everyone. After taking everything into consideration, I’ve decided to return for my senior season at Texas.

Although playing in the NFL is a dream of mine, when I looked at the whole picture, I know how much more I can develop both as a player and as a leader, and that’s what I’m looking forward to doing under Coach Herman, Coach Orlando, Coach Giles and Coach McKnight. I’m also on track to earn my degree, which is something that means so much to me, and I know how valuable a degree from UT will be to my future.

With that, the win we just had in the Texas Bowl has already started the momentum, and I can’t wait to get into the offseason program and help build the future of this program.

Omenihu split snaps with sophomore Malcolm Roach in 2017, but the 6-7, 280-pound Rowlett native still made 12 starts. His four sacks were tied with Malik Jefferson and Breckyn Hager for the team lead. He also registered 28 tackles, four quarterback hurries and two forced fumbles.

Omenihu’s decision to return should be welcome news on the 40 Acres. Texas’ defense made significant strides under new coordinator Todd Orlando in 2018. Key players like Jefferson and defensive backs DeShon Elliott and Holton Hill, however, decided to forgo their senior years and enter the NFL Draft.

The post Texas to welcome Charles Omenihu back to its defense in 2018 appeared first on Hook ‘Em.